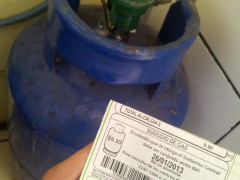 The Salvadoran state is like a father who has many children. It is in debt, has limited wages, has maxed out its credit cards and overdrawn its checking account, and while it gets loans to restructure its debt, it always comes back for another overdraft.

The Government pays US$ 9.10 each month, to each of the 1.1 million of households that are included in the database of beneficiaries of the liquefied propane gas (LPG) subsidy. This is one of the most criticized state subsidies because of its lack of financial sustainability. This photo was taken by the author.

Father State thinks he’s doing well. He tries to take care of his little ones. Although he invests little in healthcare and education, he makes sure his kids pay low prices for water, energy, public transportation, and propane gas, which almost half of the households in the country use for cooking.

The country’s annual production is approximately $23.9 billion. The money Father State has, at least in 2013, is $4.5 billion; however, most of these funds are used for the operation of the legislature and judiciary. The executive branch, which doles out the aforementioned benefits, has approximately $2.7 billion.

In spite of these limited resources, the executive branch maintains a series of subsidies that have an annual cost of over $400 million, which works out to ten percent of the national budget and twenty percent of the executive’s budget. But this money does not exactly come out of the budget, nor is it even included in it, as we will see below.

These subsidies are the most debated and visible face of the social contract in El Salvador. People perceive the state as helping them because it gives them $9.10 a month to buy gas, because they pay low prices for water, or because their children receive shoes and can attend public schools.

This social contract scheme has been discussed and criticized during, at least, the past two administrations. The main concern is that these subsidies are not adequately focused on those genuinely in need: the poorest population. The other major criticism is the lack of sustainability of these subsidies, which have aggravated the country’s fiscal deterioration and have not reduced poverty or redistributed wealth.

Let’s examine this closely. The electricity subsidy is given to households with monthly consumption below 200 kilowatt hours. This level of consumption covers homes with a refrigerator, up to two televisions, other appliances, and even a washing machine.

Critics of this subsidy say it should be limited to households with consumption of less than 99 kilowatt hours per month. However, the cost of this subsidy is covered by the Executive Hydroelectric Commission of the Lempa River (CEL), the autonomous institution that operates hydroelectric dams in the country and which has come to use more than half of its expenditures to cover this state subsidy.

Then, there’s the water subsidy, which costs about $70 million annually and is the responsibility of the National Administration of Aqueducts and Sewers (ANDA). The administration has begun a targeting plan, applying different rates depending on the consumption.

The public transportation subsidy has been one of the most criticized. The government used to pay $750 per bus and $375 per minibus to prevent higher fares. The average urban fare is $0.20, for a bulk of population with a monthly minimum wage of $208.

The annual cost of the transportation subsidy was $70 million. In this case, Father State had to admit he couldn’t afford it: in 2013, the government announced a forty percent reduction, which means that each bus and minibus will receive $400 and $200 respectively, an annual cost to the state of $37 million. This has led to protests by public transportation entrepreneurs and threats of increased fares.

There’s also a subsidy for liquefied propane gas (LPG). The government used to pay the companies that sell the product, so they would maintain prices below the real cost of LPG. Two years ago that changed, and now the government pays a fixed amount in cash to each family, so they can buy the gas at its real price on the market.

Again, criticism focuses on the LPG subsidy’s lack of precision. In response, Father State has enacted a new reform, which has pruned the ranks of beneficiaries and changed the delivery mechanism—for now, it is through the electricity bill, but the plan is to do it through some kind of prepaid card.

Subsidies go on. They have become a habit for people and a commitment for politicians. Each new president refuses to break the social contract, despite the cost to public finances.[16]

At the end of 2012, the total external debt of El Salvador was $13.5 billion, 56.5% of gross domestic product. This is not a new problem. Each year the country’s debt has snowballed: the larger the debt, the faster it grows and in greater amounts.

With limited income and increasing spending, debt becomes the last alternative to finance the operation of the Salvadoran state, a parent with complicated finances and demanding children. How long will this scheme be sustainable? What will happen when the rope is stretched to its breaking point? Is there a way to change the social contract without neglecting the welfare of the poorest? These are questions that many people ask; the government merely delays finding solutions.

This blogpost is a translated version of “El bolsillo roto de papá Estado” which has been published on Future Challenges.