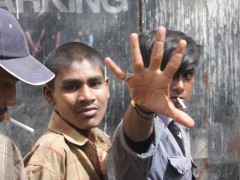 Addicted, unemployed, uneducated and proud of it - Picture courtesy of Lightstalkers.org

To give the country credit, Pakistan is one of the few countries in the world not to obey Okun’s Law which posits a ~2 percent decrease in GDP for every percentage increase in unemployment.

Pakistan is an irreverent case. Our problems of unemployment are the same right across the board from youth to adult unemployment and are far too diverse for us to address within the scope of our resources. They are perhaps – in what can only be called an affront to the people of Pakistan –  as mind-bending as the decisions made by the government in economic matters.

There are three figures for unemployment in Pakistan: the official, laughable figure of 6% (2011), the admittedly underreported figure of 15.4% (2010 est.) and the youth unemployment rate of 7.7% (2010) where ‘youth’ is defined as people in the 15-24 year age bracket. Now let’s leave aside the macro problems of infrastructure, education, et al. for a minute and focus on the core issues.

There is a sizeable population living in the country under a poverty line that stretches across 24% (2005-2006) of the country’s populace. This is where observation and experience can show what the statistics can’t.

In a large percentage of these families, the men do not work. But the women do – as domestic help. This contributes significantly to hidden and disguised unemployment in the country. And it also brings up an interesting problem.

These men are conditioned from a young age to sit at home, perfecting the fine art of ‘hookah’ smoking, and are at an advantage in that definitions of unemployment consider a person unemployed only if he/she is willing to find employment.

Fortunately, they are not so lucky in the definition of the labor force. So if, for a moment, we accept that the definition of unemployment and its statistical methods are flawed – which some economists already do – a perplexing conundrum arises: such men are unemployed because they are victims of a cultural mindset that explcitly encourages such attitudes.

Please note that this is not a reversal of the phenomenon of male dominance. The important decisions are still made by the men and even the women do not work throughout the year – choosing instead periodic and frictional unemployment and thus contributing to hidden unemployment. Besides their control function, the men, as stated, are only good for repasts of hookah and propagating the fruit of their loins. How then do these people survive? They survive by living in communities of households scattered over small regions. The women with jobs from one end of a ‘colony’ feed those at the other.

Women at work in a cotton field near Multan, Pakistan

Now how do you address unemployment where it is a culturally ingrained principle? With opportunities, exposure and education? But these people frown on all three. Maybe, such cultures can be absolved and reintegrated into ‘civilized’ society? But there are countless indigenous cultures in Pakistan. The question then arises: how much restructuring of how many cultures can Pakistan’s resources support? And what is the social and cultural opportunity cost?

So moving back to accepting the definition of unemployment as a correct premise, and still focusing on the poor, we begin to see other problems. Children from these families are discouraged from receiving education. Education is a ‘luxury’ they can ill afford.  This helps explain why 25% of children (2011) never enroll in any form of schooling and 35,000 (2008) drop out of school each year. To make matters worse, children are married off at a very early age without acquiring any skill sets by which to earn their livings. Their ‘opportunity cost’ is too great as well. What poor families can afford, however, are spouses for their children so they can beget yet another generation without the proper means to feed or educate them.

Moving up the social stratum, those families that can afford education are bent on producing graduates for saturated job markets. The results: disguised unemployment, under-employment and a percentage that forms the unemployment statistics. There is no emphasis on vocational training – a cheaper alternative which educates three people for the cost of one graduate. According to studies by the University of Karachi, 65% of all recipients of vocational training found it helpful in finding employment while 55% stated that they were paid salaries equal to those with degrees. Then what, pray, is the problem? The mindset, again.

Those who cannot afford education marry their children off before they develop the skills needed to earn a livelihood. Those who can afford education insist on having their young pursue ill-advised careers to keep up their social status. The poor do not understand the value of practical skills; the rich fail to appreciate the value of producing the right type of graduates.

The poor spend their lives in growing poverty or looking for quick ways out – by resorting to crime, joining in lucrative terrorist enterprises or illegally emigrating for minimum wages. The rich favor the country by swelling the unemployment statistics or working in overstaffed, saturated industries on minimal wages even though highly qualified. Consequently, industries requiring graduates are not catered to. Graduates who then contribute to a brain drain by looking for better opportunities abroad explain Pakistan’s net migration rate of -2.17/1000 (2011).

We have beset ourselves with problems of our own making. Pakistan is depriving itself of the skilled labor it needs to drive its industries. In ‘normal’ economies threshold unemployment is seen as an indicator of the growth potential. In Pakistan, it is an indicator of lives lost to social pressures – victims to warped perceptions.

True, there are costly repercussions for this. But then this is where the ‘world’ wants us.

Unemployment isn’t transient here; so to tackle it we have to address problems of education, social infrastructure and economic policy-making. Solving these effectually would solve Pakistan’s economic woes. Yet a stable and economically prosperous Pakistan would pose a threat to India – regionally, globally – something it can’t do now. A stable and prosperous Pakistan would also dry up an endless well of recruits for the budding terrorist industry.

The USA would also lose its bargaining prowess in dictating our internal affairs if we stood on our own two feet and left begging behind. Only China, seemingly, would stand to benefit from an arrangement where Pakistan corrects its sinking ship because of our propensity to involve China in everything.

These are facets of Pakistan’s unemployment picture that are not often exposed to scrutiny. Before we can address unemployment, there is a more pressing need to correct false perceptions because our problems run deeper than is readily apparent. Unless people don’t ‘see’, unemployment will not go away. And this is not to take account of the corruption rife among our politicians whose vested interests are best served by maintaining the regressive status quo, in line with what our ‘partners’ desire.