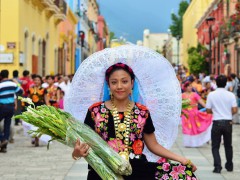 This picture by MaloMalverde shows a woman from the Istmo de Tehuantepec wearing the typical clothing of the region during one of their famous community parties known as “Velas”. License CC- BY-SA 2.0

Man, Woman, and Muxe. In the region of the Mexican Istmo de Tehuantepec, women’s strong role in society has led to a quite peculiar structure which includes a “third gender”. Neither a man, nor a woman, Muxe is the name given by the Zapotecos to males assuming the social roles, behavior, and sometimes even physical appearance of a female in order to honor his parents and take care of them through their old age.

But how is it possible for such a structure to exist in conservative indigenous  communities in the heartland of rural Mexico? It happens mostly due to their horizontal perspective of gender, the empowerment of women based on their preeminent socioeconomic role, their importance as heads of household and a slight touch of mystery that has driven multiple gender academics throughout the years to dig deeper into the case. In Istmo de Tehuantepec, being a woman is so important that men accept the honor of becoming Muxes.

The geographic distribution of the region – being the narrowest part of the territory – has always defined the Istmo de Tehuantepec as a commercial corridor in which products cross from one side to the other. In addition, the rich biodiversity and abundance of natural resources has also encouraged the practice of other primary economic activities such as agriculture and cattle raising. Of course, these factors have not turned the region into a rich urban area, but in fact, they have helped the inhabitants to achieve the organization of a stable micro economy that works perfectly for fulfilling their basic needs.

Perhaps these natural gifts, coupled with very rich cultural diversity, were some of the main factors that imposed a more integral division of labor where men are in charge of working to get supplies, women are in charge of the market, and Muxes take care of the house while helping their parents with the family business.

The fact that the women of this region – better known as istmeñas or tehuanas – are in control of trading activities has led them to have more control over the family finances, thus forging a more equitable society in which everyone has his and her own role. It has even been said that this region is ruled by a matriarchy, although this may be difficult to prove considering that, for example, in politics most of the decision-making positions are still held by men.

It is actually quite perplexing considering that, in spite of having mostly male policymakers, Istmo de Tehuantepec still adheres to the horizontal scheme of gender equality. This could be a clear example of how balanced participation in economic activities may lead to women’s empowerment in society. Men dominate the political scene, but women control the market and homes.

In fact, we can learn much that is useful from the equitable social structures created in this region to help us formulate our own effective public policies. Programs such as “Oportunidades” in Mexico, or the “Grameen Bank” in India have followed this scheme of empowering women via economic incentives thus providing them with the possibility of playing a bigger role in the decision-making of their households and communities.

It is important to focus on gender equality as a vital means towards prosperity in developing regions. The main virtue of the populations located in the Istmo de Tehuantepec is that they have organized their lives according to a wider definition of the division of roles in their societies through a tolerant gendered approach that differentiates them from other rural communities. Here, in spite of their rural limitations, men, women and muxes work together for a better life, honoring the virtues of beautiful, determined and hard-working istmeñas who trade their products and take good care of their families everyday.

(Click here to meet Amaranta Gómez, Viviana Pacheco and other Muxes telling us about their lives and preparing themselves for the “Authentic Intrepid Danger Seekers” contest.)