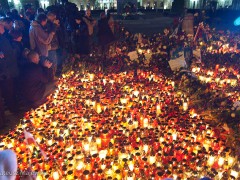 In 2010, Poland was mourning half of its political establishment, killed in a tragic accident in Smolensk. Two years later, Polish democracy is still thriving. Photo by mateuszmajewski, on Flickr, CC BY-NC 2.0.

We should start the discussion by examining the terms we use. What is actually meant by “Central and Eastern Europe”? Does the term have a geographic, cultural, or political meaning? Whichever sense we chose, a clarified definition would help insiders and outsiders alike.

In some typologies  (like those of the World Bank or  ISCE/ODIHR for instance) Central Europe encompasses Germany, Austria and Switzerland. I suppose Alexey Sidorenko is not taking these states into consideration when he uses the phrase “rollback of democracy”. By some definitions, “Eastern Europe” does not include Hungary, Poland, Slovakia and the Baltic states. And in some encyclopaedias, the term “Europe” does not embrace Russia and the Caucasus states. On the other hand Freedom House sees Turkey in Western Europe. Anecdotically, I can add that for some reason Israel is a member of the European Football Association.

The borders of “Central Europe”, “Eastern Europe”, “Central and Eastern Europe” are fluid. So are the borders of Europe itself. To avoid misunderstandings, my proposal is to list all countries we are thinking of when using one of these terms, especially if we are assigning some negative connotation to them.

2. Eastern Europe is not flat

I am not an expert and cannot speak in the name of the whole region of Central and Eastern Europe. But however we may draw its limits, this region is definitely diversified. The Czech Republic is not Hungary; Hungary is not Moldova; Moldova is not Ukraine and Ukraine is not Russia. And the same applies to Western Europe.

3.  Rollback in Eastern not Central Europe

With this caveat, I absolutely agree with Alexey’s post. We do record a rollback of democracy in Eastern Europe. Full stop. Not in Central and Eastern Europe, just in Eastern Europe: in Armenia, Azerbaijan, Belarus, to some extent in Georgia, and in Russia and Ukraine as well. And not in terms of pure  democracy, but in the transition towards democracy, because all these countries have never attained the status of consolidated democracies.

There are many indexes issued by different institutes. To the Bertelsmann Transformation Index 2012 I can oppose Freedom House Nations in Transit 2012 to show that the whole block of Central European states from north to south, from Estonia to Bulgaria are consolidated or semi-consolidated democracies today.

Okay, Hungary is troublesome on this map but the current situation is that Budapest is experiencing a rollback of democracy because of the economic crisis. Dependent on financial support from IMF and EBC, Orban has to give up his populists ideas.

No matter how we perceive Central and Eastern Europe, one thing should be clear. As a political scientist, I need to emphasize one particular aspect – that it takes approximately three generations for democracy to take root “Western style”. Its first generation – my generation –  the people who were brought up in a totally different system – is just leaving the scene and moving over for the younger one. We did indeed make enormous progress in 20 years. And fluctuations are natural. After all, Rome was not built in a day. So don’t panic, be patient, take your time and let’s live and work. I totally agree with Cornelius Ochman: ‘The two lessons we can learn here are (first) that transition takes time and (second) that each country proceeds along its own path at its own pace.’

I’m not going to write in the name of the region. I’m going to use an author’s privilege and present a personal view. Cutting all this pessimistic rhetoric, what I can say is that the country I am living in is maturing. Last year the political coalition in power was reelected, something which hasn’t happened since Soviet times. Given the background of free elections, this development is a sign of consolidation and stability. I should also mention the crash of the Polish president’s plane in Smolensk in 2010 with 97 casualties including the president himself, speakers of the Parliament, ministers, heads of the Polish navy, air force  and national security, deputies and senators. And yet nothing happened! The state is still running, elections have been conducted, and international electoral standards adhered to.

Overall, if Alex is right about the rollback of democracy in the post-communist region, then Poland must be at least the exception that confirms the rule!