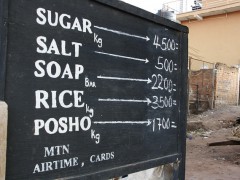 In this day and age, no economy can afford to stand as an island.

This is even truer when it comes to economic interdependence since no country can solely depend on itself in the long run. Not all countries manufacture the goods and services they want and even those countries that ably manufacture all the goods they want will need markets elsewhere; hence the need for trade with other countries. Trade can be motivated by the search for finished goods or raw materials to keep manufacturing industries going.

Trade between countries plays a pivotal role in our lives. It is through such trade that Africa gets most of its state of the art goods. Even as I write this blog, I am using a computer that was shipped from the USA through international trade. Most of the things that I need for day-to-day living including certain types of food as well as the “tools of trade” for journalism like cameras are manufactured outside Uganda. It is through international trade that these are made available to me. Yet unfortunately, Uganda’s balance of trade is still unfavorable.

Nowadays, trade between countries is being promoted as a source of foreign exchange and taxes. The countries of the East African Community are encouraging trade among member countries and regional blocks.  Uganda exports fish, coffee, cotton, and flowers to the European Union and the USA. However, export of Uganda’s fish to European markets has led to sharp price increases at home, leaving fewer Ugandans eating fish.

Another illustration of how international trade affects everyone’s life is a reflection on Uganda under Idi Amin. President Amin’s aggressive policies severed Uganda’s relations with some strategic countries causing terrible scarcities of essential goods since Uganda did not have sufficient manufacturing industries. One elder had this to say: “The lack of goods and services we suffered was due to the international economic (trade) embargo against Amin.  Amidst this scarcity, we were queuing to pay for soap, salt and sugar in advance and later wait for a week to get the goods.” Clearly, international trade flourishes when countries relate well with each other.

International trade does affect people’s daily lives so deeply that inflation in one country indirectly affects the other since countries are economically interdependent. This happens in the case of imported inflation and sometimes people also suffer under the impact of imported substandard goods.

Today, Uganda’s version of international trade is mainly bilateral and regional although there are some few Ugandans in the fish and flower industries who access western markets in Europe and the USA. Most ordinary Ugandans involved in international trade are trading across the borders of neighboring countries. As the New York Times reported, “cross-border trade between Uganda and South Sudan recently surpassed $150 million”, making the newest African country Uganda’s major trade partner.

When the borders of South Sudan were opened as peace returned to that part of Africa, various Ugandans ventured into cross-border trade. This, however, was followed by a sharp increase in the prices of many goods especially food stuffs in Uganda. The demand for food in South Sudan was higher and Ugandan food crop producers could not produce enough to meet demand at home and abroad.

Consequently, there have calls for food trade regulation from various social and political circles in Uganda. But the Ugandan government has maintained its free and liberalized economy policies. Ugandans were left with no option but to dig deeper into their pockets for the goods they were buying for less before trade with South Sudan began.

Oil prices on the world market have often pushed up the prices of goods and services in Uganda. This is because Uganda is highly vulnerable to oil price shocks as it imports almost all of its oil from the Kenyan refinery in Mombasa, which in turn imports crude oil from abroad. In 2008, at the point when a barrel of crude oil hit the $100 mark, the fuel pumps in Uganda increased their prices. And when fuel pumps increase prices, the public transport operators pass on the cost to commuters through increased transport fares. This is yet another instance that shows that international trade exposes everyone in Uganda to the consequences of imported inflation and other impacts.