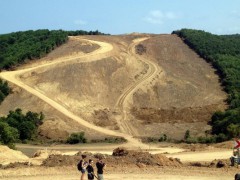 Last summer, I went to pick up a backpacking German friend in Ankara’s busy bus station. After exchanging greetings and talking about how life had been, I asked about his initial impressions of Turkey. “The countryside is impressive,” he said, “but the cities are quite weird”. When I asked him why, he replied: “Normally, when you enter a city in Europe the landscape turns from farmland into suburbs of small houses, and then gradually into denser neighborhoods with higher buildings. Here, you suddenly see a high apartment building out in the middle of nowhere, and they get more and more frequent until you reach the city center.”

I lived in Germany for a while, but this phenomenon was not among the hundreds of comparisons I made while there. So I was hard pressed to come up with a plausible explanation. Then I remembered that one day while driving to the airport, my father pointed to a massive block of skyscrapers along the highway and said: “When I was your age, shepherds were grazing sheep here. If we’d have bought some farmland back then, you would never have to work.” So the most reasonable answer I could give my friend was that the owners probably expected the city to expand towards this area so they got in quick.

The cranes are flying: Urban development in Ankara

Truly, why do we Turks live in such strange cities that look like permanent construction sites, with virtually no green space unless you count the median-strips of avenues and sidewalks so narrow they are almost symbolic? Could it be because we are the sixth most rapidly urbanized country in the World?[1] Yet, so many other countries in Asia have urbanized just as quickly and yet managed to maintain a higher level of urban planning and environmental sustainability. Take Seoul, which has 23.4m2 of green space per inhabitant and compare it to the meager 6.4m2 green space which is all Istanbul offers its residents. No wonder hundreds of thousands of Turks took to the streets this summer over a mall development project in Istanbul’s Gezi Park.

The explanation for the awkwardness of Turkish cities lies in the political economy of Turkey. In Turkey, urban land is a substitute for the underground resources we lack. It is a tool for creating and distributing wealth, as well as a driver for various other industries such as contracting, construction materials and machinery. In itself, real estate and construction are not necessarily bad as they create jobs and improve the infrastructure. However, when construction becomes so central to the political economy of a country that public and environmental resources are sacrificed in order to keep it going, it turns into a blight.

One perfect example of such a blight can be seen in Istanbul today, where it is nearly impossible to find a plot of land suitable for a large-scale construction project within the city. The solution: create a New Istanbul!  A large area north of Istanbul, home to city’s last remaining forests and water aquifers, is being transformed into a center of attraction for one million inhabitants through three massive infrastructure projects – all with ecologically disastrous consequences.

First is a peripheral highway and a third bridge crossing the Bosporus, the construction of which has already felled hundreds of thousands of trees and is expected to induce urbanization of the area. The second major project is a new airport with a capacity of 150 million passengers a year, which will turn Istanbul into one of world’s leading aviation hubs. Such a project should normally be a source of delight; but not when it unleashes an ecological disaster! The official Environmental Impact Report, largely disregarded, shows that the airport will have irreversibly harmful effects on the local ecosystem and urban water resources as over 70% of the construction site is situated in forests. Last but not least is the so-called “crazy” project of Prime Minister Erdoğan, a 40km canal linking the Black Sea to Marmara Sea, which will form a second Bosporus around which expensive real estate will cluster. Currently at the planning stage, this project may have disastrous ecological consequences possibly reaching far beyond Turkey[2], in addition to its questionable legal status due to international treaties on the Straits.

Documenting the loss: Volunteers take photos of the harm caused by the construction of Istanbul’s Third Bridge (Photo by Ovul Avkiran)

While the stated purposes of these projects may be improving the infrastructure, creating jobs and generating revenue, they will inevitably end up squandering precious natural resources at the expense of the environmental rights of the present and future generations. It does seem though, that there is a glimpse of hope. The massive protests that Turkey witnessed this summer may be the signs of a new awakening environmental consciousness among urban Turks. Yet it remains to be seen whether they will be as sensitive to the felling of a tree in the middle of the forest as they were to one being felled in the heart of Istanbul.