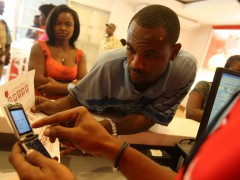 African countries like Uganda are paying more attention to migrant workers’ remittances because this money has become another avenue for spurring domestic development. The reason for this attention is simple: “remittance flows directly impact on consumption, savings and investment“.

As of 2007 Uganda was among the top 10 African remittance recipient countries in terms of total inflows according to a survey by the Uganda Bureau of Statistics. Over the years, the money that Ugandans in the Diaspora send back home has grown dramatically. It was estimated at $849 million in 2007, making 30% of the country’s Gross Domestic Product, according to the UN Human Development Report of 2009.

But due to economic crises hitting major world economies, the remittances are declining. With increased job cuts in retail, manufacturing and service sectors in most developed countries, several migrant workers are barely surviving and remittances to their families have been cut only to very necessary expenditures.

A Ugandan friend working in one of the Middle East countries told me that life is getting hard for him economically as he has had to slice the money he usually sends to his family in Uganda by half.  In fact, he says most migrant workers in less-skilled jobs are living on hand-outs and the brave ones have opted to return home to take care of the investments they made before the economic crisis.

Since the world economic recession of 2008, remittances to Uganda have somehow stagnated below the 2007 mark of $849 million.  According to the governor of Bank of Uganda, Emmanuel Mutebile, the country recorded about $760 million in 2011, a decline from $778 million in 2010. This decline is blamed on the economic crises that have hit the world.

The global economic crisis has led to reduction in remittances for Uganda and this year’s predictions paint a worse picture than in 2011. For the last three months the Uganda shilling has been greatly weakening against major foreign currency, which experts are partly blaming on reduced inflow of foreign currency from remittances.

Uganda gets most of its remittances inflows from Kenya ($326m), United Kingdom ($176m) and US ($87.4m). The three countries provide 76% of Uganda’s total earnings from remittances, according to the recent UN Conference on Trade and Development report.

The remittances are helping support lives of families in such areas as educating children and running family businesses. In the long run, this has helped improve the beneficiaries’ standards of living and tremendously contribute to Uganda’s economy.

Today world economies are interconnected by trade and employment resulting from increased migrations. So in this global world what affects one country will definitely spread another. It is a contagion of sorts.

In many developed countries jobs slashed and where jobs have been maintained cost cutting is taking its toll as bonuses have been eliminated, markets have slumped especially in real estate and automobiles. This means less money will be sent home.

But the Eurozone economic crisis where many are losing jobs and economic opportunities are becoming slimmer Africa has to brace itself to avoid future economic turmoil. Given that the world economies are interlinked with trade and international jobs, events happening in one directly or indirectly affect the other.