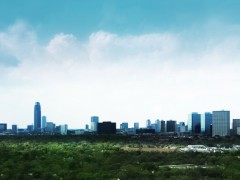 Today in the United States there are more poor people living in metro areas outside big cities than within them. From New York to California and Texas where I currently live, poverty is on the rise even in metropolitan areas experiencing steady economic growth and urban development.

50 years ago President Lyndon B. Johnson declared a War on Poverty. At the time, poor Americans lived in inner-city neighborhoods or sparsely populated areas. While this has changed significantly over the decades, the current perception of poor in this country is still largely informed by this understanding: that poverty is either an urban or a rural phenomenon.

While poverty rates remain high in cities and in rural areas, over the last three decades the impoverished population has grown fastest in the suburbs. In fact, between 2000 and 2010 the number of suburban poor grew by 64 percent, more than double the rate in the cities.

Texas in an interesting state to look at in this regard. It is the second largest state in the nation in terms of population, with vast expanses of rural areas and booming urban industrial zones. Each year Austin, Dallas, Houston and San Antonio post record numbers for growth, attracting thousands of people who move here each day to cash in on the healthy economy.

Although the Lone Star State consistently tops “best of” lists – for economic growth, quality of life, job market – in publications like Forbes and US News and World Report, and has three of the 10 largest cities in the country, it also has four of the top 10 poorest metropolitan areas in the country (U.S. Census / U.S. News & World Report). Despite a diversified economy and consistent urban growth, Texas has had a larger percentage of its population living in poverty than the national average since 1980.

Eschewing factors related to race, education, healthcare and generational differences, Texas on the whole has some 3.9 million people living in poverty. And one of its unique characteristics is that as a large urban industrial state with 86 percent of the population living in a metropolitan statistical area, its poverty rates in fact mirror those of rural states. In 2007, the poverty rate for Texas was 16.5 percent. The only other state that had higher poverty rates was Mississippi at 20.1% – what’s interesting here is that Mississippi is a predominantly rural state with a much smaller population – giving Texas the distinction of having the highest poverty rate of any large industrial state.

So what’s going on in Texas?

We can look at historical explanations rooted in the Texan Ethos, where values of hard work, rugged individualism and a survival of the fittest outlook on life informed Texas politics and ideology. We can also build on that notion to include systematic factors such as wage growth, unemployment, and immigration, to name a few. But complex social and economic issues can rarely be addressed with prima facie explanations.

Texas is the nation’s number one job creator and leads the way in labor market freedom (Mercatus Center at GMU). However, over the years the wage structure hasn’t progressed as fast as the economy. Slow wage growth means a surplus of labor, which leads to lower wages, especially for unskilled workers seeking jobs that have moved to the suburbs.

As lower-paying jobs made their way out of the inner city, poverty followed. During the recession, job losses in industries like retail, hospitality, construction and manufacturing were hit the hardest in the suburbs, contributing to rising unemployment and prompting some researchers to look to the suburbs to explain the persistent disparity between urban growth and poverty.

The suburbanization of poverty in Texas is an interesting case because of its vast land mass and booming industrial zones with seemingly endless opportunities for urban sprawl. The inner cities are less dense, resulting in massive suburban areas consisting of the very poor to the upper middle class. A resident of one community does not have the same access to jobs, education, and healthcare as a person in another community, whether on the other side of the county or just down the street.

The social geography of poverty is charted by place – from metropolitan areas to the regional economies linking the city with the suburbs – and where a person lives influences the opportunities and range of public services available, as well as the barriers to accessing those opportunities. Being poor in the inner-city is one thing, but being poor in the suburbs means limited access to transit options – a factor that is directly linked to workforce development. In the nation’s largest metropolitan areas, 700,000 households—nearly all them in the suburbs—do not have a vehicle and are not served by public transit of any kind.

I live in Austin. From 2000 to 2011, the Austin metro area was second in the nation for suburban poverty growth. People living in poverty in the suburbs, if they can’t access public transportation, or aren’t within reasonable walking or biking distance to jobs, are particularly burdened by the high costs of car ownership. Across the nation, poverty is on the rise in areas lacking the infrastructure and services to help impoverished families get back on their feet.

Suburban poverty also strains programs designed to address the needs of impoverished communities. The Federal Government spends $82 billion dollars a year across more than 80 programs to address poverty but the spread-out nature of suburban poverty and lack of expert public and non-profit service providers in the suburbs mean most of the dollars remain focused on urban communities.

Over the last decade in Houston, the suburban population grew by over 40 percent, with a 102.9 percent increase in the number of poor in Houston suburbs (Data from 2000 to 2011 in Confronting Suburban Poverty). Much of Houston’s expansive urban core is actually suburban in nature. And despite the fact that it has consistently been one of the fastest growing metropolitan areas in the US, job growth was mostly for low-paying jobs; people were working but not earning enough to live above the poverty line.

Houston, however, is a model for other cities to learn from. Neighborhood Centers Inc (NCI) is the city’s largest non-profit anti-poverty organization, large enough to avoid the often narrow and fragmented approach characteristic of most poverty programs. Its annual budget of $275 million allows the organization to cooperate with hundreds of other agencies in the region. In the past few years, delegates from as far away as Sydney, Australia have come to learn from the center. It could be argued that its effectiveness stems from adapting early on to a sprawling, centralized suburban environment.

Historically, urban growth and poverty have always been linked. One could argue that the issues of place, localism, rapid growth and marginalization of communities disassociated from the urban center have remained the same since the dawn of industrial capitalism. In order to understand this ever-present disparity, and more importantly to act on it, requires education, partnerships and a viable network to broaden the scope of opportunities available to those in need, whether social or economic. Perhaps despite the polarity of urban growth and poverty in Texas, programs like NCI offer a map to progress.