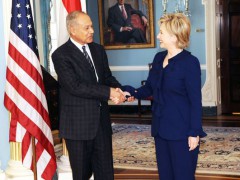 Here in the Middle East, people always point to the United States whenever they have any kind of problem. They either blame the U.S. for intervening in their countries national affairs, painting the U.S. as a criminal responsible for tragedies all over the world, or they praise the way the U.S. deals with strategic issues to secure its own interests, making it a model for modernity and development! Despite such contradictory attitudes, it’s a fact that no matter what happens to anybody, the U.S. is always involved somewhere down the line.

Weirdly enough, sometimes the same person adopts both attitudes simultaneously. He praises the U.S. for its technological and political development, while also seeing it as the main source of all the evil in the world!

Such schizophrenic feats are due to the state of underdevelopment under which we labor, which means that even though we clearly can see the difference between ourselves and developed countries in terms of technological, social, economic, and political status, we still look for any reason that can justify our miserable condition.

Calling developed nations “infidels, who’ll go to hell after death” is our most common justification, which is always followed by the famous phrase “we are believers; God will reward us with heaven”!

There are evident differences between the social and political structure of the U.S., and that of my country, Egypt. Let me take the case of the last presidential elections in the U.S. to illustrate these differences.

Even though the rivalry between the republican and democratic parties is intense, they have relatively similar presidential programs. If any of you watched the Obama-Romney presidential debates, you would easily have seen how each of the candidates were trying to convince the audience of the superiority of his own program, and the differences between his vision and that of his opponent.

However, if you analyse the main points of their programs, you will be surprised by the high degree of similarity they show. Simply put, while the two parties have minor disagreements about domestic issues such as immigration, drug use, gun control, abortion etc, even though these issues are significant, they still do not affect the destiny of the country.

On the other hand, both parties share the same notions of U.S. superiority, state secularism, preservation of  human rights and maintainence of the welfare of citizens. Such notions are common to all developed countries, as they are engraved in the human conscience as essential for mankind.

However, in Egypt we had 13 candidates, most of them with no concrete presidential plans. They mainly relied on ideology rather than any pragmatic proposals to win votes. Fear of the Muslim brotherhood enabled Ahmed Shafiq to secure almost 6 million votes in the first round of elections, while fear of the corrupt former regime also gave Mohamed Morsy a large share of the votes.

Lack of political awareness is the reason behind the rise of these two candidates, who successfully used one other as bogeymen to reach the final elections round.

By this time, Egyptians had finally realized that they had to choose between two catastrophic alternatives: one that would take them back to a pre-revolution era; the other that would probably take them to the Middle Ages. This is the tragedy we are currently witnessing and fighting against.

In Egypt, five months after the end of the presidential elections, lawsuits are still being filed against the elections committee and the winning president, claiming that the elections were fradulent!

Even assuming that the elections really were fradulent, what value does a court verdict have, delivered after the winning candidate has already spent five months in power, implementing plans and using state resources as he sees fit? What can a court verdict do when the legitimate president assumes power just to pay for the loans taken out by his precedent?

These are just a few examples of the distance that separates Egypt from the United States in terms of political and social status.

This is how long the road ahead is towards democracy.

This is how wide the gap is between us, and the U.S.