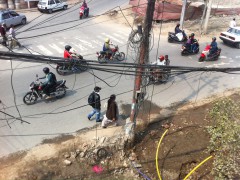 A road expansion campaign in Kathmandu has been initiated by Prime Minister Baburam Bhattarai. This campaign has been ongoing since September 2011.The project has received mixed feedback. Praised for adding significant width to main roads in need of widening, it has also been criticized for its lack of planning, including the way roads have been haphazardly wrecked without any seemingly coherent schedule to restore them.

The citizens of Kathmandu have been breathing dust for about two years now, increasing the incidence of asthma, bronchitis and other health issues.  Many trees were lost in the project with no plans for replanting. Those who lost their homes have not been compensated-although the spaces cleared appear to have been quickly filled with large and rather ugly commercial buildings with backing from big business. No attempts have been made to promote public transport: the road widening, it appears, is purely for the benefit of those who own private vehicles.

One Saturday, I heard a loudspeaker call over my wall. It was a Government official informing residents about the forthcoming demolition work to widen the road. I live in Handigaon, which is considered the oldest inhabited settlement in the Kathmandu Valley. There is a popular saying that there are no festivals like the festivals in Handigaon.  See this blog which gives an account of one of them.

Besides the music, rites, rituals and interconnected myths through which the festivals that take place in Handigaon throughout the year are celebrated, the area also boasts a rich heritage of sculptures and  archaeological sites in the Satyanarayan Mandir Temple-an ancient temple complex. An Italian archaeological team came and excavated the site, and uncovered valuable cultural artifacts, including the first documented Nepal Mandala.

The Government, however, seems to have no idea about this and is about to run a road through the settlement which in any other country would be a cultural heritage site of major historical important properly protected from road or any other development.

Baburam Bhattarai’s Maoist majority Government seem to be taking their cues from the original Maoists in China who are bent on their own path of destruction, having brought down ancient hutongs to build roads and commercial buildings for the Olympics. The building mania has continued in China, leading to a significant rise in “forced evictions”.

What is also glaringly lacking in the Prime Minister’s road-widening vision is any understanding of the topography of Kathmandu. Kathmandu was always full of little hillocks that were farmed in terraces, and many of these small terraces now survive behind the main roads, providing small lanes and green shade to pedestrians, and enabling local life. “Walkability”, or the ease with which pedestrians can navigate the city, has been pinpointed by modern urban planners as a key factor in what makes a city livable and makes it thrive both in economic and social terms.

This blatant disregard to pedestrian life, in favor of private motor vehicles and motorcycles of which Kathmandu now has millions is a serious mistake. In terms of economics, a person rushing by on his motorcycle on a major busy highway is not going to stop and buy groceries. But if it’s a pedestrian friendly market, as in Chabahil (which thankfully seems to have been spared the road widening), there will be a lot of buying and selling.

I used to cross Lazimpat, a road filled with small businesses and lined with lovely shady trees, many times a week. It was a place of true walkability and I  spent significant amounts of my income supporting the small businesses there. I haven’t been there since the road was widened, and I doubt whether I will ever return.

I am back to seeking out small corners of the Valley, pockets of neighbourhoods untouched by roads and vehicles, where it’s possible to take a little walk without a motorcycle honking and speeding by you at a hundred miles an hour. And these pockets and untouched neighborhoods is where my money will go.