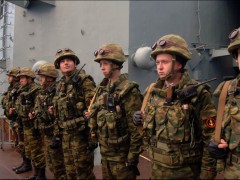 An oligarch opposed to Russia offers rewards for the capture of commandos occupying government buildings. He’s serious. But his countrymen are laughing until they cry.

KIEV, Ukraine—Since the Ukrainian army is not proving very effective against pro-Russian commandos in the East of the country, a prominent oligarch has adopted a strategy from the Wild West. He’s putting out “wanted” notices and offering cash rewards, hoping to inspire more effective action against those uniformed Russian-speaking soldiers without insignia, now known as “little green men,” who’ve been taking over government buildings and scoffing at government orders.

Further you can read how much you can have for only one Russian commando captured and delivered to Mr. Kolomoiskiy.

Who is it? Read more at The Daily Beast!