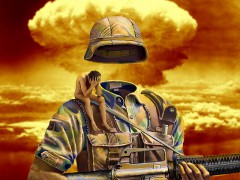 Is conflict a part of human nature?

This short film illustrates what happens when you take individuals from opposite sides of the pack mentality and place them in a neutral environment.

There is no denying the human race is obsessed with conflict. Our history as a species is riddled with conflict; often great change is only ever achieved through periods of upheaval, also often characterised by conflict.

It would seem that conflict and war is one of the great catalysts for change. As humans it is so easy for us to disregard an injustice if it doesn’t affect us, however once the conflict reaches our circle of comfort we are then catapulted into action…so then perhaps it can be said that conflict is a part of ‘human nature’, or at least the human story.

Couldn’t it be argued however, that ‘anything humans do’ is a ‘part of human nature’? If so… does that mean everything should still allowed to be seen as acceptable?

Where is the line between blaming our collective actions on human nature and taking personal responsibility for our actions? What is the toll of our conflict? War by Rafael Edwards on Flickr CC BY-NC-SA 2.0

Conflict is inextricably linked to the concept of “War and Peace”; the age old battle between “good” and “evil” illustrated through decades of battle between empires, to grudges between siblings or the fight on the streets between criminals and the police.

Good versus Evil is perhaps example of an completely polarising dichotomy that is in fact, extremely subjective. Isn’t one man’s terrorist another’s freedom fighter? Who decides who is good and who is evil?  It is a concept also so all encompassing that it can be stretched to meet almost any agenda. Australia is one example where inter-communal tensions are sometimes framed within the “good versus evil’ concept. This often fails to highlight the true nature of any conflict, instead depicting groups as a single, monolithic entity rather than a number of human beings with humanised emotions.

The example of the relationship between mainstream Australia and asylum seekers perhaps, or the Cronulla riots in 2005 or even the fall out after the protests in Sydney (in response to the Youtube video made on the Prophet Muhammed PBUH) are examples of situations where the ‘pack mentality’ overshadowed individual thought processes and where those labelled as ‘different’ were now seen as the enemy.

This group think process is furthermore fueled by our environment. Shortly after the protests in Sydney last month, comments were made in the media highlighting that “ethnic tensions were set to explode” (source).

A key ethnic affairs adviser to the NSW Coalition government has warned that religious and ethnic tensions in western Sydney have the potential to “explode” the nation’s multicultural fabric in the aftermath of last Saturday’s Islamic riot.

In the light of such rhetoric, you cannot blame individuals for perhaps thinking the worst…

So, on further reflection, there are three points that are being made.

Firstly, in situations where opinions are being shaped by a highly influential environment, it becomes very easy to see the world in a good versus evil, war versus peace dichotomy. We all know however, when looking at the facts that life is rarely ever that black and white and often it depends on the individual values and perspectives.

This then leads to the second point on dealing with “tensions” on a broader scale. There is no doubt that incidents such as the Cronulla riots require an investigation of the underlying currents in a community. But the discourse in which such a situation is dealt with must be honest. It doesn’t take a lot to find out what the issues are; often all you must do is ask.

Thirdly, on the question of conflict and human nature, in light of the above…

I believe that it is folly to say that conflict isn’t a part of human nature, given our propensity towards it in history. I don’t believe the ‘human nature’ argument however, can be used as an excuse.

It is our responsibility as humans to live up to our moral standards and take individual responsibilities for our actions, and that means choosing to not engage in conflict.

Conflict used for change is often a race to the bottom; brutality can extend its miserable tentacles and affect generations. Only when a cycle is broken by collective individual actions to act differently can ‘peace’ be found…whatever peace means.

Peace...perhaps illusive? Perhaps in the eyes of the beholder...? Kalimbaradio on Commons Wikimedia CC-BY-SA-3.0