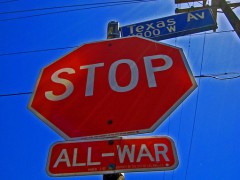 Politicians, scholars and philosophers have been debating the origins of war and peace for a very long time. There is no common solution and no shared viewpoint on this matter. Yet just because people have fought for centuries does not mean that it is not within our power to stop the fighting, and change this state of affairs.

It seems to me that wars and conflicts were justifiable only in the early stages of human history when people fought for survival and territory with better resources. With the advent of technology and civil society, humankind as a species does not need to fight for territory anymore; we rather need to learn how to work within the means at our disposal. For example: solar energy has become a viable and worthwhile alternative to oil and other non-renewable energy sources. Further development and research into solar energy doesn’t just eliminate the need for needless wars over limited resources, it also promotes a much cleaner and healthier environment.

In our modern age, war has become a convenient tool for manipulative politicians and large corporations in their general greed for larger profits, new markets and cheap labor.

Did Americans really need to start a war on terror in Iraq? Even though President George W. Bush did not have any clear evidence of the existence of weapons of mass destruction in Iraq, the state machine could not be stopped. The US government ended up drowning in debt over a conflict too big and too complicated to handle, while private American contractors, construction and weapons manufacturing corporations reaped the benefits from a slew of special contracts.

If Iraq represented the most dangerous island of fundamentalism, then why was Saudi Arabia not targeted by this war against unfair and undemocratic regimes? Saudi Arabia has one of the most repressive regimes in the world, with limited freedoms, oppression of women, and medieval traditions of decapitation and stoning. The US and Saudi Arabia are more polarized in their values and beliefs than Iraq and the US ever were – not to mention that Bin Laden, along with15 of the 19 attackers on 9/11 were all Saudi nationals – yet Saudi Arabia remains one of the biggest US allies in the Middle East and the Arab World. Why then is the USA not interested in making Saudi Arabia more democratic? I believe it has something to do with the fact that Saudis are filthy rich, have a lot of oil, and play nice, so American corporations benefit handsomely from this partnership.

Russia, the other “big power”, proves the same point: It has been involved in a violent conflict in Chechnya for a very long time. Chechen terrorists have organized various attacks in Russia, killing hundreds of people. Even though Russian troops have tried to control the territory for years, the region still remains unstable: the police cannot control the streets while political activists and NGO workers continue being kidnapped and killed.

The Kremlin could not afford an independent Chechnya as any such move would carry vast political implications and economic losses. The oil and gas sectors are major sources of income for Chechnya. So once again, what was the reason to keep getting involved in this war?

Some countries suffer from the consequences of war, in terms of human losses and destruction of infrastructure, while others make a fortune by selling weapons and awarding contractors with lucrative deals to rebuild what was destroyed. In my opinion, instead of spending staggering amounts of money on military budgets and relying on non-renewable resources, governments should stop their shortsighted policies and engage in more fruitful, long-term solutions.