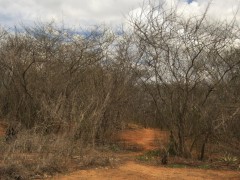 Since 2012, the villages of the semi-arid Ceará, a state in northeastern Brazil, have been crying out for drinking water. The “sertão” is a naturally dry region, but there are years when the amount of rainfall is smaller than expected and drought takes its toll on the people living there. Lack of rainfall in 2012 and 2013 have prolonged the drought by almost two years.

Once the leading economic region in Brazil, the Northeast is now mainly associated with backwardness, poverty and drought while the Southeast region with its gold, coffee and industry has been on a steady rise that started in the 18th century. During the 20th century, as thousands of people left the “sertão” and fled to the cities for a better life and more opportunities, local governments used the drought as a moral imperative to gain national funding for construction of water reservoirs. Ultimately, however, large landowners were the only ones to benefit from this.

Dams and reservoirs were built along the Jaguaribe river and work on the  Castanhão reservoir [pt], the largest in Latin America, was finished in 2003, bringing the promise of efficient relief during dryer seasons. But  – the question needs to be asked – in times of need who is the water meant for?

The past 25 years have seen efforts for economic development in Ceará. The main achievement of the state government administration is the Port of Pecém and its industrial complex. Their flagship project is the steelworks at  Pecém, a company partnership between Brazil’s Vale and South Korea’s Posco and Dongkuk.

The government aims to attract global industries by offering an affordable electricity and water supply. So water from the Castanhão reservoir has been destined for Pecém and the capital Fortaleza.

A study by the Nigéria collective [pt] in July 2013 found that hundreds of families living in 175 out of the 184 municipalities around Castanhão have been forgotten. With little or no access to safe drinking water, most of them have to rely on water tank trucks. The quality of this service, however, has been questioned more than once. In May 2013 [pt], there was a public outcry in the media that the water was contaminated; in August 2013, the problem still hasn’t been solved [pt] in some areas.

And it doesn’t stop there. The state government’s project to build an aquarium in Fortaleza has come in for more criticism. It’s really ironic if you think about it, that while thousands of people are struggling to get water, the government plans to vast amounts of it on an sea life aquarium quite as if they had water to spare.The traditional Cry of the Excluded protests [pt], which occur in Brazil every year on Independence Day (7  September), took place in Fortaleza this year near the site designated for the aquarium. They protested state investment in tourism and not in ensuring a supply of safe drinking water for the people struggling in the countryside.

Recently dozens of members of the Landless Workers’ Movement (MST) protested in front of the local headquarters of the National Institute of Colonization and Land Reform (INCRA) for land reform and drought relief. They partially blocked an avenue with a truck with a banner that proclaimed: “Water for the people. No water for the port, exports or aquarium.”

“Water for the people. No water for the port, exports or aquarium.” The banner of protesters of the Landless Workers’ Movement (MST) in Fortaleza, during a two weeks-long sit-in in front of the headquarters of the National Institute of Colonization and Land Reform (INCRA) in Fortaleza, that started in October 2013. Photo by Gleison Maia, used with permission.

Things are pretty quite with no commotion and you can easily get the impression that nothing serious is taking place. However the state company for hydric resources says reservoirs have collected less water [pt] since 2010, making it the worst situation ever in Ceará. The impact has been huge with 72% of crops lost in 2013. The government is paying subsidies to farmers who have lost their entire crop and has announced funding of rainwater tanks for the next rainy season.

Government investment is based on the saying  which translates roughly as “Bake the cake first, and share it later”, which resonates strongly in Brazil. Insofar as cakes are concerned, it sounds pretty obvious — which it’s meant to do. It’s a well-known and much used metaphor to justify modes of shepherding the economy towards growth that is widely appreciated by politicians, economists and political advisors.

Attention is focussed on one particular sector of the economy, mobilizing the necessary variables (the ingredients), and then “the cake is baked”, or in other words, the economic forces take their course, the investment pays off and the sector booms, thus producing a chain of positive events: job creation, increased consumption and growth in GDP. Inclusiveness should eventually come by sharing the slices. The saying “A rising tide lifts all boats” is another such metaphor, promising a chain of events that brings benefits to everyone.

Yet isn’t there a moral and humanitarian limit to efforts for fostering economic growth? Regardless of the “cake sharing metaphor”, the people in the sertão have been consistently let down by political maneuvers that promise to act on their behalf. Water is such a basic resource for human life that no promise of “sharing the cake afterwards” should speak louder than the daily needs of human consumption.

In the meantime, all hopes are fixed on the next rainy season in early 2014. If it rains a little in December,  people say that’s a sign of good times ahead.