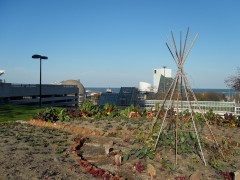 Cities have long been considered unsustainable for their excessive resource consumption—Howard Odum famously deemed them “parasites” for not contributing to ecosystem regeneration. However, a growing environmental consciousness, accompanied by an emphasis on local and DIY projects, seems to have inspired citizens to get their hands dirty as “green” projects are popping up across the world, changing what it means to develop urban land. This movement harmonizes with calls for a “food revolution” that will change how, and importantly where, food is produced.  In cities across America, individuals and organizations interested in community development, health, and sustainability are planting crops in front yards, roofs, esplanades, and vacant lots. Even the American Planning Association has come on board, publishing in 2010 an issue of the trade magazine, Zoning Practice, devoted to urban agriculture.

However, are cities ready to integrate agriculture into their spaces? Some cities have shown interest, but many municipal administrations have yet to develop a legal framework for incorporating these spaces into the built environment. New York City’s constant tussle with community gardeners is a well-known example of this conflict. But even in cities with an excess of vacant land, agriculture is not always welcomed.  In Detroit there are currently more than 400 community gardens and farms yet the zoning code does not recognize agriculture as a permitted use. This is likely because the Right to Farm Act, a state law designed to protect farms in the hinterland from the previously expanding city, would take effect rendering commercial farms exempt from city codes. If Detroit recognizes the current projects as agricultural in nature, the state law will take effect, transferring authority of land located in the city to the state.

The city of Cleveland, Ohio offers an example of clearer, and much more successful, municipal planning. Stepping forward and building a city agenda that includes agriculture, Cleveland, has passed progressive zoning legislation to promote and protect agriculture within city limits. Cleveland, much like Detroit, tops the list of shrinking cities because of its declining population and vacant urban core, trends that began in the late twentieth-century with the decline of industry and manufacturing in the American Northeast. Yet in the space of four years, Cleveland created four new zoning distinctions that focus directly on urban agriculture. The first – the Urban Garden Zoning District – was passed in 2007 and created the first American zoning code allowing a city the ability to reserve land for farming. These changes represent a commitment on the part of Cleveland’s municipal government towards urban agriculture and thus more sustainable lifestyles for its citizens. As described by City Councilman and sponsor of the legislation Joe Cimperman in an interview with the Plain Press, “A city’s most powerful tool is zoning … By zoning these gardens we are preserving them for generations. We’ve already seen a great response because people are realizing that they can plant without having their gardens taken away from them.”

These zoning changes do more than support community action. They lay a foundation for profound economic reinvestment. In a study produced by the Cleveland Foundation, authors found that a shift to locally produced food could create over 27,000 new jobs in the city as well as increase regional output and state and local tax collections by millions. This could be an important component to achieving the goals of Sustainable Cleveland 2019, a 10-year initiative to leverage Cleveland’s wealth of assets to develop the city into a “green city on a blue lake.” It just so happens that Local Foods is the theme of the 2012 Summit.

If the city is a living organism and the economy its beating heart, then the combination of economic benefits and sustainable development makes sense. As the city’s vitality is intimately connected to its perceived vitality, Cleveland may have discovered a solution to its shrinkage problem pleasing both citizens and economists. Will these changes be replicable in other cities? Perhaps, though only if planners and lawmakers can work together to create land use strategies that welcome innovation and a new conception of what cities can produce.

Kimberly Rubin is a current senior at Columbia University, majoring in Urban Studies and concentrating in Art History. While based in New York City, she is interested in the vitality and redevelopment of shrinking cities. In her spare time, she is learning to beekeep.