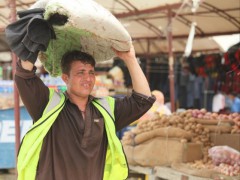 In the 21st century scenarios such as rising inflation, lack of employment and a crippling economy have become far too common for people all across the globe. Limited by financial constraints, the people hit by them look to battle it out in the job market to find work that in most cases won’t meet their true potential. In Pakistan it’s certainly no different. What is different here is “what” type of jobs are sought, “who” actually seeks them and the prospects they have for gaining employment.

Young people under the age of 28 – who form the majority of the population and the very backbone of Pakistan – significantly fall behind in the job race. The reasons for this have to do with unhelpful educational training, social norms, lack of support from the government and ignorance by job creators. Taken collectively these discourage young people from fulfilling employment roles and are the prime reason behind the  staggering 21.72% youth unemployment rate in Pakistan. Now a percentage of this size in such a vulnerable age group certainly demands immediate attention and action. But before we can move to help we need to look into the problem more closely.

In its agenda of “engaging and mainstreaming youth in development” the United Nations Development Programme (UNDP Pakistan) highlights one of the problems faced by youth when going into employment. The problem links to the national education system and calls for action to remove and remedy  ill suited education programs, lack of vocational skills, limited profession options and illiteracy. In the chart above UNDP Pakistan describes further educational and skill building problems that prevent the youth from gaining meaningful employment in the country.

Apart from education, another major reason limiting the number of young people in employment is lack of government support. By Pakistani national law, the government requires large public and private organizations to provide internship opportunities and all universities to provide on-campus jobs for at least 5% of their students, But once more this is only on paper. Little or no action is ever taken by the government to enforce this law to help young people gain jobs or encourage other bodies to hire them. Creating lucrative work opportunities for youth – the prospective majority of the workforce  – is something that just doesn’t figure on the agenda of government officials. Nor is any attempt made to address the problem of sub-standard wages in the workplace and other forms of exploitation which curb youth participation in the job market.

But that’s not the end of it:  in terms of social norms and taboos that contribute to the struggle of our younger lot we also have class and gender barriers to contend with. In the South Asian region, young middle  and  upper class people refrain from working or are not allowed to work by their families as it is seen as a sign of the family’s poor financial standing. These youth move onto job markets after completing higher studies with little or no financial or work ethic and are thus totally unequipped to face the tough competition they encounter. On the other hand underprivileged youth from the lower social class are much more likely to have worked from earliest childhood and so are much more experienced in their own fields of work. The main issues they have to contend with are low wages, lack of opportunities for professional growth, abuse and exploitation. At the same time gender barriers are also imposed on females from all classes who are at the receiving end of negative pressure from their families and in their workplaces when trying to earn a living.

However the biggest and most critical problem impacting on youth employment is clearly the unavailability of jobs. Industrialists, businessmen, government officials and other “job creators” seldom create jobs either locally or nationally. A recent publication of the International Labour Office (ILO) entitled “Global Employment: Trends for Youth 2011” discusses the struggle of young people to earn a livelihood in the light of this problem: “Still, the majority of the world’s youth are in developing economies, where some young men and women have very little chance of ever finding work…”. Such powerful individuals and companies neglect the great human resource potential Pakistan harbors which masks the problem.

At the end of the day, all of the above factors work to create a work environment that is hostile to young people. To tackle this we must look to ourselves as young citizens and demand employment reforms in the way of education and social awareness, reforms that reflect the importance of inclusion of youth. We need to join our voices and channel our boundless energy, innovation and initiative in a concerted effort to overcome challenges, enhance economic development and most of all act against the global recession. It is only through such measures that we can engage in productive youth employment and help young people stand strong in today’s competitive job market.