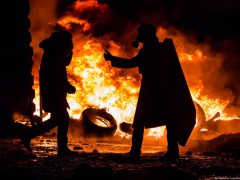 The real hell in the very center of Kyiv. By Ilya Varlamov.

People from all over the world see the black smoke from used tires, aggressive protesters throwing stones and molotovs in police and think: these are dangerous extremists! Why don’t they resolve all these questions in their parliament?

The government tells the same to the people gathered at the Maidan in the very center of Kyiv from the end of November 2013: “If you don’t like us, go to the next elections and vote for the others! If you have some problems with thugs, go to the courts!” Opposition MP Viktor Matchuk recently gave the best answer to all these undoubtedly wise suggestions. At a TV-talk-show on 112 channel he suddenly grabbed the mobile phone of an MP from the power Oleg Tsariov and told him: “Now you can go to the court and try to seek justice. Of course I know that the judge you will appeal to is my relative and I am his boss as well, so what? The court is the only way to get your mobile back”.

After the doubtful decision of the Constitutional Court which dramatically extended the president’s authority in 2010, Viktor Yanukovitch appointed in key positions of power only his close friends. The Parliament was the only obstacle to his absolute might, but he almost got rid of it literally buying up MPs with the help of special intermediaries. “I was offered $1 mil to move from the opposition to the power”, – MP Oles Doniy said. The loud scandal bursted out when Roman Zabzalyuk, an MP from the opposition, carried out an experiment with the MPs that depended on the party in power for money. He made a secret record of the negotiation with an intermediary Igor Rybakov. “We started talking from $500,000… Everything will be ok… This is our approach, shit!”

During the last four years in power, Viktor Yanukovitch managed to usurp its judicial, legislative and executive branches. Now almost all bills proposed by the opposition have no chances to be supported in the parliament. When the opposition MPs tried to protest by blocking the speaker tribune, MPs from power burst into the hall and brutally beat protesting politicians. It was just the beginning. Today nobody is out of danger in Ukraine. The death squads and thugs are ranging through the city at night, grabbing even passing pedestrians to torture and kill. Meanwhile police shoots protesters with buckshot and killed at least four of them. Journalists are afraid to wear special orange waistcoats marked “Press”, because policemen level their rifles to that bright targets. At least forty journalists were injured since protests started. For the last two months, Ukraine turned into the real hell. The courts are especially cynical. They imprison people arbitrarily without any compliance to the law. A man was recently thrown in jail for several used tires he was carrying in his car. The judge said that he carried the tires intentionally to set them on fire at the barricades. 15 years in prison threaten him now, and many other people are arrested all over the country for similar reasons.

Riot police is going to throw molotov cocktails at protesters. By Max Perepelytsa.

It looks like we don’t have fair courts, impartial police or any balance of power. In such conditions, some people don’t see the path to a peaceful settlement of the conflict. There are many people in power who call for the elimination of the protest with armed riot police squads. The government purchased 17 000 live-cartridges for the police and the latter just waits for the order. Don’t ask who will shoot first, they are already shooting.