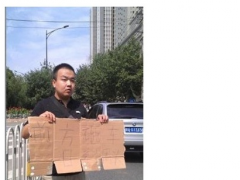 The recent tensions between China and Japan about possession of the Diaoyu Islands have led to a wave of anti-Japanese protests throughout China. This time official TV and newspapers have crossed a new line, implying that China would now be ready for a war if the dispute is protracted. Does the Chinese Government really care that much about these little islands or is it all about keeping the media and the population busy and far from the rampant crisis?

A good joke on this is doing the rounds on the Chinese website Sino Weibo:

A government official says to his secretary, “What Japanese products do I have on me? Please run a check for me.”

After a while the secretary comes in and reports : “Check complete. Not a single item. Your car is from Germany, your watch is from Switzerland, your clothes are from France, your mobile phone is Apple, your child is in the United States, your property is in Australia, and your bank account is in Hong Kong. And your mistresses — they’re all made in China.”

“Great,” said the official, “Then let’s unite the people and let’s all boycott Japanese products!”

Is the Cultural Revolution back?

It’s quite a surprise to turn on the TV in China and find out that it’s currently broadcasting images of  the island protests. Even during the highest peak of the Arab Spring, the national channel CCTV didn’t really show the public demonstrations. Add to this the fact that any kind of protest in China is usually carefully avoided or muffled  by media and  shut down by soldiers and tanks. So it’s strange to see this sudden resurgence of “public interest” and people screaming with banners in the streets. There’s no real important change to be detected though! The only two men who have tried to sneak into a protest with a banner saying: “Freedom, Democracy, Human Rights” were  arrested in Shenzhen on 16th Sep, as reported by the Chinese NGO Canyu.

For some days, the media had been claiming that the “Diaoyu Islands belong to China”, subscribing to the feeble evidence and arguments put forward by Chinese vice-foreign minister Fu Ying. Then, an anti-Japanese fever led by Chinese Communist Party  youth organizations started to hit the streets in the whole country. Shouting out slogans that “China won’t give way to Japanese devils”, the first target to bear the brunt was the greatest symbol of industrial competition:-cars. Also directed by slogans straight from the Little Red Book, protesters burnt Toyotas and Hondas, assaulting those “traitors” who were actually driving Japanese cars. Scared by all this agitation, car  factories quickly sent their citizens back to Japan, creating an unprecedented climate of tension between the two countries. “Protesters even carried images of Mao, who died in 1976” as Qi Ge the Shanghai writer wrote in Foreign Policy. A scary aftertaste of the  Cultural Revolution was floating in the air, with the quiet approbation of the police.

This message was posted online and received massive approval with 71,073 shares and 10,815 comments before it was finally deleted by censors – Translation by the Ministry of Tofu – CC 3.0 2012

All this agitation was extraordinarily well-timed to fit the political agenda of the CCP for the month of October 2012. The new president Xi Jinping, who will enter his new function this year, mysteriously disappeared for fourteen days, leaving the media with lots of questions about his forthcoming succession. At the same time, the  last decade’s worst political scandal in China was peaking with the recent purge of former top official Bo Xilai. For months, enormous scandals and repetitive trials have parted the curtain on CCP’s internal attempts to settle old scores dating from the Cultural Revolution. Stuck in those murky waters, the Chinese Government was in bad need of a good media alibi to divert attention from its internal affairs. Playing the well-known card of “Japan rivalry” offered a convenient outcome. Indeed, even if commercial and diplomatic exchanges between both countries have significantly  increased during the past few years, many sensitive issues are still looming over their relationship.

The main cause of Chinese resentment towards Japan goes back to unresolved memories of the Second World War. During that time , horrible war crimes and chemical experiments on the  population were  committed by the Japanese army of occupation. Since the tragedy of Hiroshima and the withdrawal of all troops from China, the Japanese government  has never publicly acknowledged these crimes and is still held accountable by the Chinese people. What’s worse is that the Emperor of Japan himself goes every year to the Yakusuni Shrine to honor the memory of Japan’s greatest generals, including several  “Class A”  war criminals. As a Frenchman myself, I can hardly imagine a peace situation in Europe where  the German premier still celebrated  “Nazi Generals” every year.

The majority of Chinese call for peace

While all national and international media were focused on the  protesters’ violence, millions of Chinese people were calling  for  peace online. In an episode of the Al Jazeera show, the Stream, some active figures of the Chinese Internet explained how the reactions to the protests on Chinese social media has been overwhelming, with millions of tweets tagged with “love the country, but stay rational”. Even after the keywords “anti-Japan” and “revolt” were blocked from Chinese social networks to prevent any counter-government opinion from spreading, there were still millions of people begging for an end to all this nonsense and any further toll of political victims.