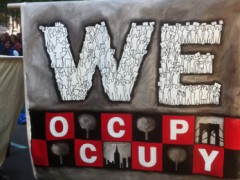 For weeks, reporters, pundits, and political strategists have been puzzling over this question. Now, the organizers of the protest have provided at least part of the answer. A couple of weeks ago, they invited a CUNY sociologist, Héctor Cordero-Guzmán, to survey visitors to their main Web site, occupywallst.org. More than sixteen hundred people responded to Cordero-Guzmán’s questionnaire.

Here are the main points, of Cordero-Guzmán’s study:

The O.W.S. organizers were keen to stress the fact that so many of their supporters are politically independent. “Occupy Wall Street is a post-political movement representing something far greater than failed party politics,” they said in a post about the survey. “We are a movement of people empowerment, a collective realization that we ourselves have the power to create change from the bottom-up, because we don’t need Wall Street and we don’t need politicians.”

You can find the entire paper as a PDF file here.