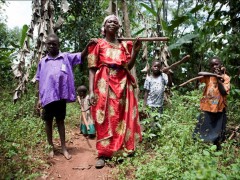 What do bugs have to do with your food? Many of us do not think of that beyond the moment when we select and wash our fresh produce.

A farmer poses with her children in their family’s cassava field. Credit: Gates Foundation (CC BY-NC-ND 2.0)

Researchers from the Helmholtz Centre for Environmental Research (UFZ), the Technical Univ. of Dresden and the Univ. of Freiburg found that ecological pollination services was valued at around 200 billion US dollars in 1993 and rose to around 350 billion US dollars in 2009. Since 2001, the costs of production for pollination-dependent crops rose far faster than the prices of non-pollination-dependent crops, including, but not limited to grains, rice and maize.

A major factor is the increased use of pesticides (which kill the insects that would foster pollination), which leads to increased usages of fertilizers. The researchers concluded that due to the destruction of insect habitats (hedges, forests) for commercial agriculture and use of pesticides, the production costs and market prices of coffee and chocolate are likely to go up in the future.

Generally, increases in food production costs and the resultant food price hikes due affect the developing world most directly, as much of the crop cultivation takes place there and a greater portion of their populations work in the agricultural sector.

According to the findings, the potential decline of pollination could have a disproportionate effect on countries for which pollination-dependent crops or cultures comprise a substantial part of the gross domestic product (GDP) from agriculture. This includes, but is not limited to, Argentina, Belgium, China, Ghana, Honduras, the Ivory Coast and Jordan.

The majority of countries affected are developing nations. In the case of Ghana and Ivory Coast, a rise in the costs of production of cocoa would affect the nations’ labor forces, as agricultural workers comprise 52 percent and 70 percent of the national workforces respectively. Similarly, in both Ghana and Ivory Coast, agriculture comprises a significant percentage of the GDP.

This ties to an article I wrote a year ago, entitled “Africa’s Corn Monocultures and the Global Commodities Market.” Addressing the effects of climate change and increased investment in crops from which biofuels are produced, I wrote of the potential effects on food security within corn-producing nations such as  Malawi, where corn- a pollination-dependent crop- occupies 90% of cultivated land and constitutes 54% of Malawian caloric intake.

With this in mind, it is clear that increases in costs of food production, and resultant increases in food prices due to environmental and market shocks would have direct effects on local producers and consumers.

Earth Day is our annual reminder to consider our place on this planet. You, the consumer, are one link in the food supply chain. It is tempting to avoid digging deeper into what goes into our food, but as we participate in increasingly globalized markets, these considerations will only become more important.