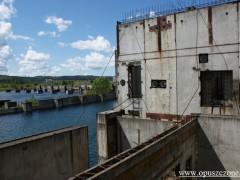 The answer to this question is a chronological sequence of various factors which have interacted ever since the Second World War.

The first factor is coal. Mother Nature has richly endowed the current territory of  Poland with “black gold” as the Poles call it.  Its coal reserves were sufficient to make post-war Poland one of  Europe’s biggest producers and exporters of this energy resource for many years. Easy access meant there was little interest in searching for alternatives. The other component helping to preserve the status quo was socialism – a political system applied in the country as a result of the USSR’s control of the Polish territory after WW2 – where any concept of public opinion was non-existent. There was no public pressure or awareness of the natural environment to impact on policy-making. The only source for generating electricity in the People’s Republic of Poland was coal.

When forecasts for the needs of energy-consuming industry finally broke a deadlock in the debate on a nuclear power plant in Poland, the socialist economic system was already on its knees. Plans for building such a power station were initiated in 1982 and extended. The crucial blow dealt to the Polish nuclear industry was an event in the neighbouring  Soviet Union: in Chernobyl, located in Byelorussian SSR, a power plant incident took place that altered the global perception of nuclear energy, not to mention the perceptions of people in the immediate neighbourhood.  The public campaign to administer Lugol’s solution to children – aiming to mitigate the effects of radioactivity – left its mark on a whole generation.

Furthermore, the continuing decline in popularity of nuclear energy coincided with a crisis in socialist Poland in the 1980s, which made building the first nuclear power plant in Żarnowiec impossible for financial reasons.  This was followed by an economic crash which only underscored the collapse of the earlier plans – the project was abandoned. The economic crisis of the 1990s meant relinquishing the energy-consuming model of the economy in favor of more inexpensive solutions while also causing many companies to go into liquidation.  Yet it also lowered the level of energy consumption at that time so that it was possible for the existing infrastructure to function throughout the next 10 years after the fall of the Iron Curtain in 1989.

The present: new limitations and solutions

Not until 2000 did the level of energy consumption rebound to reach that of 1990. Today, energy self-sufficiency stands at 80 percent. The remaining 20 percent is imported. Nevertheless, the infrastructure which was built in the Soviet era is becoming obsolete, and campaigns to reduce energy consumption through a more economical use of energy are ever less effective.

In contrast to economic policy in a socialist system, liberal democracy is establishing new and previously unknown social and political solutions. The first one is public awareness armed with votes of the citizens who are calling for their representatives to care about the natural environment. Next, there is the association with international institutions that oblige Warsaw to implement ambitious plans for reducing coal-based energy production. Attention is now shifting to nuclear energy as the cleanest way to provide much needed power.

What is interesting is that the Fukushima nuclear disaster this year has not influenced the government’s plans to build such a plant in Poland. In contrast to neighbouring Germany, where the Chancellor Merkel has announced a date for the closure of all nuclear power plants – it is 2022 – Poland is continuing work on its own nuclear power station. Neither the events in Japan nor the public reaction to them has changed the government’s agenda. For the time being, everything is going according to schedule, and the first stage – preparing the legal basis for establishing a nuclear power plant within the Republic of Poland’s territory – has been successfully completed.

The building of a nuclear power plant is not a topic that evokes strong emotions across society. Despite some fluctuations, the number of opponents voicing their objections remains at a constant level of 50 percent. Yet the statistics do not mirror the muted nature of the debate over government plans: outside the fierce debate within a circle of experts about whether Poland should have a nuclear power plant, this topic receives little attention from the media. Perhaps the situation would change if at long last there were an information campaign. This, however, cannot be started as tender procedures have not yet been implemented. Several marketing companies are currently fighting in the courts over the PLN 18 million assigned for the campaign. Each time results were announced, the bidder who lost out took further legal action thus bringing things to an effective  standstill. Scheduled for 2010, the campaign is finally to be started with a delay of one and a half years. Then there will be public consultations and the debate might heat up.

The case of Germany shows that building a nuclear power plant can be an issue of political infighting. Firm support for or opposition to such project is a great argument for each smaller party, a tool which can be used to gain half of electorate. Yet thus far this problem is theoretical in Poland as the country has neither a power plant of this kind nor any advanced construction plans on which public opinion can exert an influence.