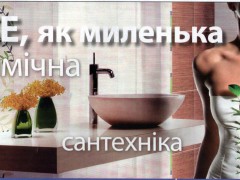 The first Olena is 30 years old and she “renders cleaning services”. “Please, don’t take picture of me working, better snap my place of work. Look there! I even don’t wanna know what’s happened” – she said to a journalist. Of course few people would like to see even such photographs: Olena cleans rooms after murders, suicides and fatal accidents.

“Two years ago a guy was killed in the next house”, – she remembers. “All the floor was flooded with his blood. His relatives offered me 40 euro for cleaning it. The neighbors were too squeamish. But I didn’t have a penny to my name. So I went in and cleaned it all perfectly”.

After this, Olena put an ad in the paper and now she has 4-6 orders and earns about 600 euro a month … and has loads of “vivid impressions”.

This is a success story, isn’t it? Well, I’m not so sure. Let’s give some background: Olena has two children and works as a saleswoman in a shop for 100-200 euro a month. Ukrainian prices are close to Middle European ones so you can easily imagine what her conditions and her “financial success” look like.

The second Olena is about 40 and works as a street cleaner. In winters her work is especially hard with mountains of snow everywhere. “A street cleaner is like a tractor”,  Olena says. “Look at me and you’ll understand why. The next day after work my muscles ache. Everything aches! It’s like a 3-4 hours training in some fitness center. After all this time working I’m like Rambo in a skirt. But it’s very difficult to find something to wear, because my figure is like a frame”. Olena works for municipal services for 100 euro a month, a sum which the Ukrainian government considers more than sufficient. Often enough Olena only gets her money after long delays, but she’s not complaining,  “You have your work,  so go ahead and work, it’s your pleasure!”

The third Olena doesn’t take offense at those “woman behind the wheel” jokes, she’s used to them because she’s now been working as a taxi driver for 8 years. Before that, she was in real dire straits after her divorce. The monthly salary of a hospital nurse is about 100 euro which “is a real disaster when you have two children and no benefits from the state.” She raised credit for a car and started her own business. “There were days when I slept no more then 4 hours,” she says.

The fourth Olena is impossible to talk with because she’s a figure in a billboard poster who  advertises dalle (Dutch tiles) in a very peculiar way. “Will lie down with pleasure!” is what the caption says. Olena is half-naked and there is no pronoun, so it’s not exactly clear what will lie down – tiles or the woman. Maybe Olena gets 100 euro too? The Ukrainian poet Andruhovitch wrote a poem which became a very popular song with its refrain: “100 bucks per month and everybody f…ks you!” A character in the poem reflects on what this phrase means: “Is it to be taken literally or figuratively? And which sense is better?” It’s a bitter satire on women’s work in Ukraine. She sees no way out of the poverty trap and when she does find one, it leads to the loss of her womanhood.