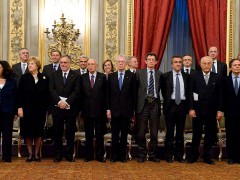 The articles about Italy I have read in international press, especially those written after the last elections, are generally uninteresting, often simplistic and  rarely illuminating.

This has happened also thanks to “Movimento 5 Stelle” – the 5 Stars Movement – an internet-based political action group headed by the comedian Beppe Grillo–  and its democratic breakthrough effect. Even though I have to admit my repugnance for its leader and its naïve and dangerous idea of direct democracy, it is still a fact that the movement has the lowest average age of membership -37 years- and the second highest percentage of women -38%-of all Italian parties. The highest percentage (41%) of women members is with the Democratic Party.

This gave me a glimmer of hope in the gloom since a long time ago I realized that if you take a closer look at contemporary Italian society you will see that two of its worst evils are gerontocracy and sexism – two vices that hold a deep common root in gender inequality. Analyzing the situation of women in Italy in my opinion, can give us a better understanding of the causes of low productivity, low competition and high-youth unemployment.

When we speak about gerontocracy, we must first note that over the past decades Italy has become the country with the highest percentage of elderly people in Europe and one of those with the lowest birth rate. In an “old country”, with few youngsters around and with a historically conservative past it is pretty normal that the elderly should rule. In modern societies the only way to boost demographics and balance the natural effects of industrialism is to provide families in general and women in particular with the economic and social instruments designed to give them security and faith in the future.

In Italy the welfare state is so badly oriented and so poorly managed that even nowadays four out of ten women are forced to abandon their jobs after their first pregnancy; moreover,  as pregnancy is considered too high a cost for many employers, it is a common -though illegal-  practice to ask a woman during a job interview if she has any serious intention of having a child at some future point of time.

Recent statistics show that just one out of five of Italian children has any chance of  attending a nursery. But not only that: since the costs of public services are supposed to be entirely borne by municipalities and regional councils which are now feeling the brunt of the financial crisis and the European Stability Pact, more and more nurseries are in private hands and offer their services at very high prices given the lack of competition.

How can a country of the old open up to modernity? How can the few children produced by a sinking birth rate pay for the retirement funds of their parents and grandparents?

When we speak about sexism, we have to consider at least two fundamental issues: the huge commercialization of the female body on Italian television –I am a staunch liberal but nevertheless I’d take ironclad measures against it– and the historical gap within Italian jurisprudence.

Suffice it to say that the right to divorce was only acquired through a referendum in 1974 and that the article defining so-called “delitto d’onore” –honor killing– was finally repealed as late as 1981, following the victory of another referendum establishing the right to abortion. Standards punishing stalking and violence against women were approved only last year.

Sexism or the loutish vision of gender superiority, essentially creates men who are convinced that women are at their disposal: for sex, at work or within the family. Yet this kind of man constitutes an economic and social burden for a modern society.

In a recent documentary film “Girlfriend in a Coma”, directed by the young filmmaker Annalisa Piras supported by Bill Emmoth, a former director of “The Economist”, these and other themes related to the moral collapse of Italy are analyzed with passion and accuracy. Italy is defined as a possible warning sign for the whole Western World.

For centuries Italy has been a beacon of Western Thought and since I am a proud Italian and I do feel part of the Western World in all its inclusivity and openness, I would dearly like to see my country back in its rightful place.

In 1861 Salvatore Morelli a southern Italian and a patriot member of the “Giovane Italia” was the first to write an essay on gender equality [1], 8 years before the much more celebrated “On the Subjection of Women” by John Stuart Mill.  In 1867 Morelli was also the first elected MP to propose a draft law on equality before the law for men and women[2].

Following Morelli’s line of thought, UN Commissioner Violeta Neubauer said in her address about the female condition in Italy that women are not the problem, they are the solution. Greater participation of Italian women in economic and political life, in line with European standards and possibly even setting new ones, is the only hope for a new “Young Italy”.