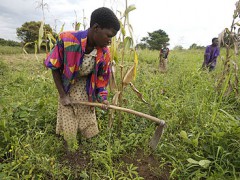 Speaking is a fundamental human right but unfortunately in West Africa it is a luxury for some and most especially women. In many West Africa countries, the culture, education and cultural norms does not encourage women to speak out in public let alone on the issues they face, for example – abuse, oppression and the seizure of their right to express their desires in terms of refuting sex or sexual advances from male etc.

Women constitute almost 53% of the population and 80% of these women live in the countryside, villages and rural areas. They account for 90% of the agricultural produce and labour and do most of the transportation and processing of farm products.

Women in most or almost all West African states and I will make my reference point to Sierra Leone and Nigeria in particular are prohibited from speaking out in their community and thus denied them the right to participate in decision making about management of natural resources, of which they are the producers and primary end users. Men are seen as the all wise, alpha and omega of the family and women are there to procreate and produce – take care of family issues and ensure that food is ready when her husband is back home from work. Patriarchy is a menace in West Africa and it cuts deep within its society that women are rampantly abuse on all levels and no one can defend their right to express themselves at any given time of when and how they want to.

By tradition women do not participate in the discussion of community problems. They do not express their views in public unless they are mandated to do so by a group. In fact, given the social division of labour, the many domestic tasks that fall to women leave them little time to attend meetings. Thus, they have never acquire the habit of participating or of speaking in front of men – the normal taboo of religion and its rhetoric is flaunted at them and patriarchy which is the easy way for most men is so easily used to dissuade their voice.

It is shocking to see that in the 21st century we still have women that have to travel long distances for fire wood a source of domestic fuel in other to cook for their family. Hence the Earth Summit in 1992 in Rio de Janeiro emphasized the role of women in preserving a viable and stable environment and the need to reduce extreme poverty in which is closely linked to environmental degradation.

Although the degradation of natural resources is a generalized idea, it severity, damaged and the constraint that it generates vary from one agro-ecological zones to the next.

Allowing women (in rural areas) to speak and appreciating the value of their knowledge can instil confidence among their social groups which suffers daily from injustice and inequalities and can help encourage them in constructing a vision for society especially the environment. The right to speak is a very importance phenomenon for every person, social group and of society as a whole. Speaking allows traditionally marginalized persons, communities and groups to participate in taking more relevant and equitable decision for sustainable development in all aspect of their lives.

It will be unfair to say progress has not been, but what has been achieved so far is less insurmountable to how serious this issue cut deep within society. The overwhelming majority of rural women in West Africa still have NO voice – this is a fact and this is a reality presently most of these women are living daily.

The right to speak must mean the right to express oneself without prejudice or intimidation and listening and communication and exchange ideas constructively. Women in rural need to be given a platform to express themselves, compare their views with others groups and through dialogue, exchange of knowledge they will be able use in deciding the best actions to be adopted when it comes to their lives and help aid in sustainable development for their communities and environment.

Illiteracy is a major issue for most of the West African countries – in no less than 70% of the women are illiterate, confined in their environment and have no access to information that might deepen their understanding about the dangers of an unbalanced environment and the hazard it might cause. Rural women have trouble in analyzing problems in depth, identifying it causes and finding possible solutions to some of their challenges – However real their plight and condition is, the underlying causes need to be uprooted – Rural women need to broaden their horizons – the questions, how will this task be achieved should be the next basis of discussion. I propose environmental education.