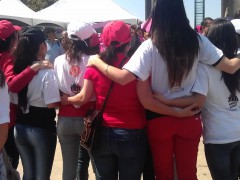 She wakes up in the morning with no dreams on the table, no plans for the future and nothing but the promise of around 30 to 50 men paying to touch her body, to violate her pride and make pleasure out of her suffering. Beaten, raped, threatened and void of hope, she feels controlled by the pimp who regulates her days, spends her earnings and seeks to eliminate every bit of her self-respect.

In spite of positive changes leading towards women empowerment over the past few years, the topic of women’s work would be incomplete without including one labor industry that has remained strong in many parts of the world: sex trafficking and exploitation.

This picture, provided by an anonymous source, shows some victims of sex trafficking who have rebuilt their lives. The rule says that non of their faces should be photographed by the media in order to protect their identities.

According to the Trafficking in Persons Report 2012, quoting information from the ILO, the crime of trafficking in persons currently affects at least 20.9 million victims, from which 4,500,000 are cases of sex trafficking, and 95% of them women.

With a total revenue of 152.3 billions of dollars in 2007 – from which 51.3 billions correspond to sex trafficking, according Siddhart Kara’s Sex Trafficking investigations – this activity recently became the second most profitable illegal business after drug trafficking.

Once the sex trafficking victims are induced via abduction, sale by families, recruitment by former slaves or seduced by individuals who promise them love and care, they are forced to work as slaves under a scheme of extremely cheap workforce. Let’s suppose that a Mexican girl works up to 30 times per workday and charges 10 dollars for each service; this would mean that the pimp (the girl’s boss) would earn from her services approximately 300 dollars per day, while the country’s minimum wage is around 5 dollars a workday.

This industry is so lucrative all over the world that it is very difficult for national governments alone to control. It is calculated that there are around 80,000 victims in Mexico alone, turning the country into a center of international supply, a bridge for Central American victims trafficked to the USA, and a destination for nationals or foreigners asking for sexual services at touristic spots such as Cancún, Puerto Vallarta or Acapulco.

Under the preambles of the 2000 Palermo Convention and the creation of the FEVIMTRA (Special Office for Crimes and Violence Against Women and Human Trafficking), the topic started to gain attention in Mexico in 2003 and finally in 2005, one of the first and few shelters specialized on this type of victims – Fundación Camino a Casa–appeared.

After doing some documental research, receiving help from the organization Contra la Trata de Personas, AGAPE, speaking with some anonymous experienced sources and interviewing administrative personnel from the Fundación Camino a Casa, I managed to get a clear picture of the important role that nongovernmental organizations play in the efforts to reduce this crime. Their duties consist of spreading information about the problem, protecting the victims in hidden security shelters, following a legal process and starting the way towards reintegration.

But this is not simple, for in order to stabilize the victims´ life it is necessary to change their complete mindset from a perspective of considering exploitation and violence as normal, to one of self-respect and values. Only this way will they be able to go on with their lives, establish goals, learn alternative ways to make money and form functional families.

After receiving help from the foundation, many girls manage to reestablish their lives, and some have even committed to the cause. For example, there is the case of a former victim that decided to go back to the field and help two other girls gain control from their old pimp, Noe Quetzal, a famous trafficker who was also wanted by the FBI and was finally prosecuted.

By now, Fundación Camino a Casa has helped to reintegrate into society around 131 victims from which only one decided to go back to her old lifestyle. While the number may seem small, the impact is huge considering that it works on the reintegration of 20 to 25 girls at a time, on a process that may last from months to years and that costs around 40,000 dollars per month to sustain.

The problem in Mexico –common to the developing world– is that there is no adequate law enforcement and rules tend to vary according to regions and local codes. For instance, according to Rosi Orozco’s book “Del Cielo al Infierno en un día”, which documents testimonies of former victims, there is a town in Tlaxcala called Tenancingo where it is a normal business to become a pimp and even their families help men adopt this profession.

According to the previously quoted Trafficking in Persons Report 2012, Mexico is considered as a tier 2 country, which means that it is already working on effective legislations and making an effort to correctly handle the problematic trends, but it hasn’t still achieved control of it.

The population must be more informed, the laws must be correctly homogenized and enforced, and a punishment shall be granted not just for the exploiters but for the whole chain including most of all, the client. The mindset must change so that, what is known today as “Modern Slavery” can begin to be considered an ancient mistake.

After ending my investigation and taking a five-minute break, I started thinking about our modern society and the devaluation of life hidden on each level of our social behavior. A funny idea came to my mind. There’s a scene on the movie Finding Nemo where a shark steps onto the stand and says: “fish are friends, not food”. I wonder, will the people ever step onto the same stand and decidedly repeat: “human beings are friends, not objects”?

(Special thanks to the Fundación Camino a Casa, the anonymous sources consulted, and  the organization Contra la Trata de Personas, AGAPE, which granted me with their confidence and helped me to gather more information about this huge problem.)