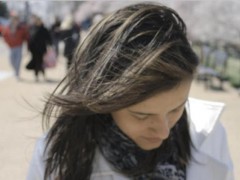 Some decades ago Esperanza was married secretly. She and Francisco got together one Thursday at 8 in the morning at the Metropolitan Cathedral of Medellín, with two friends who acted as witness. Afterwards each went their separate way to work and that was it; no fancy party, no public ceremony. The reason was that at the time Esperanza worked at the Coffee Federation, the coffee guild notorious for its support for certain social values with a policy of hiring only young single women, because married women should stay at home taking care of their families. Eventually, Esperanza had to leave because she got pregnant. Since then she has developed a career as a chef, has authored two cook books and is now a local celebrity on a TV show where she teaches viewers how to cook and shares delicious recipes. People recognize her on the street and ask her for an autograph. She has achieved everything she hoped for without neglecting her husband or her three children one single day of her life. I know this because she is the mother of my husband, and has been a mother to me in this foreign country.

Her experience is part of a broader social context in which many important productive sectors abide by catholic values in what is still a confessional state (Colombia has been a confessional state until 1991). Colombian society is very conservative in terms of traditional values and catholic beliefs which give women an exclusive role at the center of family life. Until 1934 women were legally dependent on their fathers or husbands who would administer their estate and wealth; only in 1957 were they granted the right to vote.

Fortunately things have changed, even though women are still fighting for equal rights and recognition in their daily lives in a country that is still “machista.” I have to confess that I have been positively surprised by the responses I had from the women I interviewed for this post. Colombian women are very hardworking and at the same time  very much devoted to their families (not an easy thing if you ask me!). It is their faith in their own capabilities which makes them capable of transforming their society, and they do this with a smile on their faces.

Isabel. Photo by Felipe Quinceno. Authorized reproduction for this article.

Isabel is 24. She studied international business and graduated from college last year. Since then she has worked in the private sector. In addition to her marked expectations about what her professional future will be, she also has a social conscience and believes she should work for her country and make a difference. Her family supports her in all her endeavors, and she intends to pursue a career in foreign affairs and diplomacy. “In ten years I’ll be working for my country. This will be the bridge between different cultures and growth. In ten years I’ll share the passion for working for Colombia with people and this will encourage me to follow my dreams instead of letting them go.”

Matilde is the mother of four. She started working at the age of 24 when she  separated from her husband and had to provide for her family alone. Since then she has worked in bakeries, restaurants, a furniture factory and in the city hall of her hometown. Matilde is a very enthusiastic person with a deep political conscience. When she was little she wanted to be a singer. A few years ago she came to Bogotá looking for better opportunities. “I have never felt different from men, but being a mother with a young child has made it difficult for me to find a place to live. House ownerss tend to believe that if you don’t have a husband, you won’t be able to pay my rent or that your son will be a problem. Being a woman makes no difference, what makes life hard is to be a working woman and a mother at the same time and do both things well.”

Claudia wanted to be a lawyer, basically because injustice was just too evident to be ignored. She couldn’t finish high school, however, and since leaving school she has worked cleaning houses, or in the service sector. She has  worked for a cleaning service agency at a university for ten years now. She has four daughters, but for her that is quite normal coming from a large family where men were in the minority. She says that she has not felt discriminated against for being a woman, in fact she states that “it can be easier for a woman to get a job, because women are doing the work that was traditionally done by men. You see many women working in the construction industry or as taxi or bus drivers, and in the security industry … but you don’t see men working as housemaids.” Even though she has no easy life, and sometimes money is scarce, she is convinced that her daughters are capable of doing whatever they want to do. Only this might take  a little more time because they have to work first to save up money for their education.

She started to sell candies on the street seventeen years ago. Like Matilde and Claudia she is the head of the family, and mother of four. And she survived an abusive marriage. She wakes up everyday and collects her stock from a restaurant which stores her merchandise for 20 dollars rent – which is a lot. “I have been working since I was ten years old when my mother sent me away to a house as a housemaid. Everything I earned I had to give to her. Since then, I have had a lot of jobs, most of them in sales. But I like to be independent, have my own schedule, and my own business even if it is very modest.” She is very optimistic about the future of her children; her eldest daughter is a commercial advisor in a bank.

Monica joined the National Police Force a year and a half ago. She wanted to be a police officer for as long as she can remember, partly due to the influence of her father who is also a police officer. Being part of an institution traditionally managed by men and doing a “man’s job” is a symbol and a responsibility at one and the same time. “It’s more complicated for women to join the force because the number of openings each year is quite small, but once inside the institution, women are treated with respect, it’s the people outside (civilians) – especially men – who don’t respect me as an authority. It’s not an easy job, neither for women nor for men, and many people leave. ”

One can be optimistic about the future situation for women in Colombia. Despite the social and political institutions, and the continuance of chauvinistic male-dominated culture, it is the faith and confidence that Colombian women have in themselves that can transform the future for the daughters of all the Matildes, Claudias and Luz Estelas in Colombia a conviction shiningly embodied by women like Esperanza, Isabel and Monica.