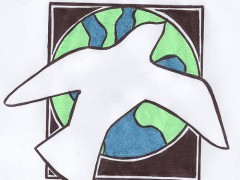 I would like to argue that peace is possible between individuals and societies. If, that is, we learn to accept that various perspectives are acceptable and possible and allow others the space to express and live their lives according to their own ideologies and views. Conflicts are a part of human nature but conflicts may also be considered as a positive or regenerative force supporting the evolution of a culture as cultures do not remain pure but borrow the qualities and values of other cultures, absorb them and make them part of their whole. In history, all cultures including the Roman, Greek, European and Islamic, have gone through the same process. Presently, the term ‘globalisation’ of culture is also a product of the same process. So if, the intermingling and absorption of values (soft forms) is possible, why not the same for mutual co-existence?

The clash of different civilizations puts a big question mark on the face of mutual co-existence. I think the reason is that the negative side is the one that has been most highlighted with the view of the co-existence of communities or the idea of togetherness receiving less attention because of political aspects. In order to achieve political dominance, cultural conflicts have been induced through a number of different strategies.

I have always observed that the reason for hatred and violence is the view that looks at the ‘other’ as essentially negative. If clashes and conflicts are seen as a regenerative force or as a means to arrive at new conclusions and perspectives, and if the other is ‘also’ taken as ‘the good’, then such conflicts will eventually become positive as the struggle of the forces will be on and toward the positives.

We have always seen that cultures never remain pure. The current connotations of globalism or cosmopolitanism or multiculturalism and its existence in every part of the world including the USA, the UK, and Asian countries are suggestive of the fact that individuals and cultures have a tendency to absorb other cultures or cultural traits or values. Hence, it is quite possible to incite peace in the world with the help of tolerance, patience and love for ‘humanity’, which are the keys to peaceful co-existence. Also, as I always say, the spirit of ‘agree to disagree’ peacefully will enable us to make this world a happy one.

I would also place the relations between the US and Pakistan in the same perspective and hence I believe that the current state of affairs between the US and Pakistan also need the principle of ‘mutual’ tolerance. Both countries need to take a step back to understand one another and ‘agree to disagree’ rather than wage wars, because safety and security are the prerogative of all humankind and not just a few chosen beings. Let’s accept that the road toward betterment is open, as only then will we be able to take our first steps toward peaceful ‘mutual’ co-existence in the world.