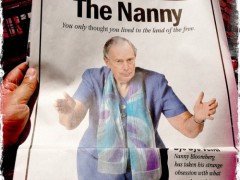 Deep in American DNA is a visceral aversion to despotism….The bad news is that we don’t feel that way—anymore—about softer, more diffuse and bureaucratic forms of tyranny. Every American is taught from grade school up that they should fear living in the world of Orwell’s 1984. Few Americans can tell you why we shouldn’t live in Huxley’s Brave New World. We’ve got the dogmatic muscle and rhetorical sinew to repel militarism, but we’re intellectually flabby when it comes to rejecting statist maternalism. We hate hearing “Because I said so!” But we’re increasingly powerless against, “It’s for your own good.” – Jonah Goldberg

In the land of the free, we are increasingly comfortable with allowing and even encouraging the government to control and manage the most personal aspects of our lives. Unfortunately, the growth of what Goldberg refers to as statist maternalism and others colloquially call the nanny state has been difficult to curtail. In part, the inability to successfully push-back against the nanny state is due to a number of profound cultural weaknesses.

There are myriad examples of such overbearing paternalism[1]. The most prominent one in today’s American newspapers is Obamacare, the healthcare law that mandates that individuals buy health insurance and demands that insurance companies provide certain (arbitrary) types of coverage. The justification for such forced requirements is that they make insurance better for the insured.

In New York City, outgoing Mayor Michael Bloomberg, who was not satisfied with trying (and failing) to ban individual’s purchases of large foundation sodas, has recently begun a campaign to force buildings to encourage their tenants to take the stairs instead of the elevators—all in the name of improving individuals’ health. Likewise, California is considering a diktat that will require certain individuals to save 3% of their annual income for retirement. While the nation’s capital is considering mandating a 24-hour waiting period to get a tattoo, Americans across the country have been told that incandescent light bulbs are so inefficient that they must effectively be banned in favor of CFLs.

One commonality among all these laws and proposed laws is that our leaders and their purportedly enlightened advisors have decided that a specific behavior is preferable to the status quo and that, accordingly, the government must use its powers of coercion to force each individual into compliance for his own good. Proponents justify these laws by referring to any number of “facts”—a scientific study or personal conviction may be cited—that rest on the belief that the government (or its experts) knows better.

Unfortunately, as Mr. Goldberg points out, Americans (and Western civilization in general) are largely unable to reject such nefarious statism. As a culture, we have essentially failed to articulate (maybe even recognize) the reasons why we ought to oppose these more subtle forms of external control. It has always been easy, as Goldberg argues, to resist overt despotism. Stalinism and Nazism were deeply unappealing because of how blatantly they stripped individuals of the right to choose how to live their lives.

Yet, it is much harder for people to resist softer forms of tyranny, even if in principle they are as much of an encroachment on one’s personal choices. The American Left lambasted the more overt (and more narrow) Patriot Act, only to raise the banner of the more subtle (and widely impactful) Obamacare. Part of this is due to the fact that in many cases it is logical to perform the behaviors that are compelled by nanny-state laws. It often makes sense to wait before rushing to get a tattoo, saving money for retirement is reasonable, exercising and eating healthy are generally quite wise, and buying health insurance is frequently a smart decision. The government nannies rely on such seemingly unshakeable foundations, which makes it quite difficult to refute the policy offerings they serve up.

However, just because such behaviors may be logical or beneficial does not mean that people should be forced into complying. This is one of those intellectually-flabby leaps of faith that far too many well-intentioned Americans make. They incorrectly conclude that if it makes sense for an individual to restrict his caloric intake of soda, then it is appropriate for someone else to restrict his caloric intake for him. Adherents of such arguments fall into the trap of assuming that just because something is (presumably) good, it should be written into law.

There are a number of cultural handicaps that leads to the American inability to resist the nanny state. Oftentimes, we accept a misapplication of social science in public policy, allowing, or even encouraging, policymakers to inappropriately rely upon the findings of, for example, a recent study to implement new regulations or laws. Statistics that support the benefits of saving are proof for mandated retirement funds. A study that shows obesity is linked to soda consumption becomes unquestionable evidence for new regulations. In Western societies, which are so steeped in a culture of science that it has become a quasi-religion, the supposedly learned conclusions of our wizened sages are often blindly implemented as gospel.

However, the reality is that it is often hazardous to consider the latest conclusions of science to be “the truth” and thus appropriate to be codified into law. Science frequently overturns its own established wisdom. Likewise, by its nature, science relies on models that are always a simplification of reality. Applications of the lessons of the laboratory, lecture hall, and classroom to the real world dismiss the dynamism that complex social, cultural, and economic systems exhibit, not to mention the difficulty of implementation. The stylized, specific, and caveated conclusions of science are often ill-equipped for the rigid, one-size-fits-all world of public policy. Americans also forget that our supposedly superior, enlightened scholars (and their friends, the technocratic leaders) are humans too, with their own preconceptions, biases, flaws, prejudices and mistaken beliefs. They can be wrong just like the unwashed masses, but the costs of their errors, when enacted into laws, can be far more expansive.

There are other cultural deficiencies that prevent Americans from pushing back against government paternalism. We are, by-and-large, conditioned to be results-driven, not process-driven. Few would argue that it is beneficial to do a child’s homework for her, even if it will help her get an A in the class (which is the ultimate goal isn’t it?). Yet, in other areas we fail to appreciate that there are benefits of persevering at something and that the process is important. Ending poverty is paramount, while little care is given to how it is done (as long as it gets done). Consequently, if the state forces a supposedly desirable outcome, the ends justify the means.

Western intellectual foundations also generally view the world in a simple and static manner. Problems are uni-dimensional and stable. A homeless man merely needs a home and his problems will be solved. Simplistic thinking is why the nanny state can be so appealing. If an expert or journalist has indicated that obesity is a problem, the nation must go on a diet. But, as most people intuitively know, the real world is much more complex, and problems have multiple causes, symptoms, and side-effects. The government cannot solve my obesity problem, because it cannot possibly know why I am fat. Instead, a blanket solution will undoubtedly fail, and may even create more harm.

A final cultural problem worth mentioning is our baseless belief that we can solve any and every problem. Western notions of progress and egotistical human superiority can yield a hubristic belief that there is nothing in this world that will not yield to our might and ingenuity. It is off-putting to concede that there are severe limitations to what we can achieve. And yet this is the reality, particularly when attempting to implement top-down solutions. And while we have accepted many limitations in the physical sciences—gravity is immutable—the natural laws that dominate the more ethereal cultural, economic, and social landscapes continue to be dismissed.

Together, these deficiencies, and others, have contributed to a weak basis from which to push back against the nanny state. We have largely failed, as a culture, to articulate the unalterable structures of our world and the limitations we face when trying to “make things better.” We misapprehend government’s purpose and the benefits of our journey, and instead fall into a miasma of short-term thinking.

This easy-way-out mentality is obviously costly (it creates dependence, unintended consequences, etc). But our natural fondness for the path-of-least-resistance generally wins. In theory, it is much easier and cheaper to rely on force, rather than persuasion, to change other’s behaviors. Why try to explain complex concepts to the benighted if one can simply force them to do what is really in their own interest? In a sense, this attitude is the reincarnation of the hubristic white man’s burden, turned inwards. While our ancestors saved the souls of the heathen with the end of a bayonet, today we save our philistines with the honed thrust of expert knowledge.

Such a lamentable perspective will undoubtedly yield deleterious costs and, in all likelihood, the eventual destruction of what has made Western civilization paramount. Fortunately, this path is not inevitable, especially if we are able to tone our intellectual muscles to better resist creeping forms of statism. Discussion, education, and a thoughtful self-examination may reignite the resistance that we historically displayed against despotism in opposition to its modern, subtle manifestation, the nanny state.