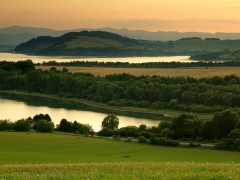 I remember that day when I came home earlier and saw the burning twin towers on TV. My thoughts at the moment were – someone crazy had his ‘dream’ come true but he’s taking many innocent people with him.

I waited for the news updates hoping they would bring a happy end and tell me that the people trapped in the buildings were saved. The following day I thought the worst was over. I expected a tightening of airport security and the intelligence agencies to start searching for the people behind the attack.

In Hollywood movies elite troops shoot everyone and finally get to kill the bad guy after he tries to pull one last dirty trick in front of them. In real life, however, I prefer a legal process in front of a judge.

But after the responsible person (Bin Laden) and his country of stay were quickly identified, Taliban forces refused to give him up without proof of his guilt. Waiting for the ‘Hollywood ending’ took nearly a decade.

Implications of the “War on Terror” for Slovakia

It’s sad to realize that during these 10 years many more people have died than in the actual 9/11 attack. Including four Slovak soldiers who died in the irresponsible Iraq adventure.

Ten years after I’m still missing headlines about the closure of Guantanamo.

I can understand when a fighting force takes captives on the battlefield and demobilizes them till the end of war. What I can’t accept is using torture.

The fact that Slovakia has accepted three (the highest number compared to our neighbors) of Guantanamo prisoners for resettlement (in a special program of rehabilitation of prisoners not convicted of terrorist activities), and has refused American financial support for this is one of the better moves of our country’s government.

Even though at the beginning the prisoners  went on hunger strike to protest conditions allegedly worse than what they found in the US base, at least they were free.

Polad Sabir Sirajov from Azerbaijan is still living in Slovakia.

Two of his colleagues returned to their home countries after the Arab spring. News coverage of Rafiq Bin Bashir Bin Jalud Al Hami ends with his return to Tunisia. The Egyptian Adel Fattough Ali El-Gazzar “has been sentenced in absentia in Egypt in 2001 to three years in prison for affiliation with a group called Al-Wa’ad.” On his return home, he was seized directly at Cairo airport. But according to reprieve.org, after some initial troubles, his appeal is now scheduled to be heard in January 2012.

For citizen on our side of the world these ten years can be summed up in a loss of some freedoms, having to deal with stricter security measures in travel and the financing of army operations abroad.

But despite the billions spent, I still do not think the world is now a safer place.

And I can wholeheartedly agree with David Cole that “adherence to values of liberty, equality, and dignity is more likely to further than to obstruct our security interests.”