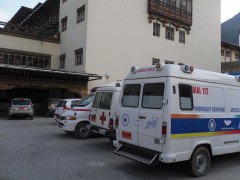 The greatest wealth is health- Virgil

I do agree with Virgil here. Though no money can buy health, in modern times it seems that money determines access to better healthcare services all over the world as people have started preferring private healthcare services. In Bhutan too it’s no different.

The people of Bhutan  do have free access to both traditional(indigenous) and modern healthcare services. As Bhutan gradually opened itself up to the rest of the world, its development philosophy based on the idea of Gross National Happiness – a belief that a society should not be measured by material indicators but by basic concepts like well being and happiness including environment awareness, family and health – meant that free universal healthcare for all citizens  is central to its public policy-making.

Bhutan’s health services have come a long way. In 1961, the country had only one hospital and very few dispensaries. It now has more than 29 general hospitals, and over 170 Basic Health Units (BHUs) among other modern facilities. By 2008, 90% of the population had been immunized, and life expectancy has now increased by twenty years.

Sometimes I wonder if my older brother and sisters, who all died as infants in the early 1960s, could have survived if better medical services had been available then. It was a time when the child mortality rate was very high unlike today when we enjoy good pre-natal and maternity care.

But the big question is how long can Bhutan continue to be a welfare state providing free education and health services to its people. There will come a time when the population will increase and their demands will be heavier. Will the Royal Government be able to meet them?

The downside to free public health care is overworked doctors, lack of specialists and medicines and long queues. On the other hand if private clinics can provide adequate medical facilities for those who can afford to pay for them, it will obviously reduce the burden on the Government. Over the years, many affluent Bhutanese have gone to neighbouring countries like Thailand, Nepal and India for medical care. It would save these people a lot of time and money on logistics if the same quality of medical care were available in our own  country.

Even though a privatised healthcare system does have its shortcomings like unequal access to treatment and care for rich and poor,  and fear of losing doctors from the public health sector, this will ease the burden and give access to those who can afford it especially in times of need. Sometimes in emergency situations patients have very little time to travel out of the country for treatment, and if they are not provided with specialist treatment in their own country, it can be life-threatening or even fatal.

Of course it’s very likely that when the time comes for us to pay for our private medical care services, we will feel the pinch and appreciate the free healthcare we are now receiving. But aren’t there always two sides to the same coin?