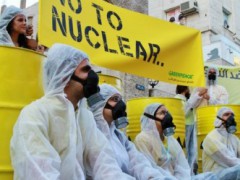 Since the Egyptian revolution in January-February 2011, the Egyptian gas pipe that supplies Jordan and Israel has been bombed 4 times up to the time of writing. Egyptian gas is vital for Jordan because with it Jordan generates 80% of its electricity. At this time particularly, all eyes are turned to the nuclear power plant Jordan is planning to build.

The Egyptian gas line has been bombed several time since February.

Basically, Jordan generates 99% of its electricity from either oil or gas which  in turn is 96% imported. Its lack of natural resources gives Jordan a major energy issue which means it must establish solid ground for national energy security and reduce the kingdom’s dependency on energy imports. The discovery of uranium ore in Jordan has given new momentum to the idea of building a nuclear power plant that would cover much of Jordan’s energy needs.

This program, backed by the monarch in a royal decree in 2007, aims initially to build a third generation nuclear power plant in the southern area of the kingdom near the city of Aqaba, Jordan’s only seaport. The aim of building it there is to provide cooling water from another future project: the Dead-Red Canal, a project to supply the rapidly shrinking Dead Sea with sufficient water to offset the loss of water that used to reach the closed sea from the river Jordan. The Canal project was supposed to be a joint venture between Jordan, Israel and the Palestinian Authority, yet Israel and the Palestinians dropped out for a number of reasons. Jordan pursued it alone, partly because the proposed canal would supply cooling water for the future nuclear power plant.

Israel was opposed to the nuclear program in general, and in particular to building it near its borders, just a few miles from the seaside city of Eilat. Backed by the Americans, Israeli opposition forced Jordan to relocate the plant, this time to the north in Mafraq. The question now is how to fuel the plant given the absence of any river or sea. The hard answer is from waste water produced by the Samra wastewater processing plant. This way Jordan will be building only the second plant of its kind anywhere in the world, and this is causing a huge argument about the pros and cons of the project.

Public opinion has not shown any serious opposition to this project since Jordanians, as part of the Arab world, have not yet developed any marked sense of environmental awareness. In fact, the majority of Jordanians backed the project simply because it was opposed by Israel and they see it as a sign of progress in the face of Israeli superiority. But since the last nuclear incident at Fukushima which happened at the peak of the Jordanian reform movement last March, with their new-found ability to express themselves through protests and sit-ins, Jordanians have had a complete U-turn on the issue after realizing the extreme ecological impact such a program would have in terms of initiating, building, fueling, cooling and operating it using the limited natural resources the country has. This summer witnessed the birth of the first real public environmental movement; it appeared in the form of protests against the nuclear project and a couple more environmental issues.

Anti-nuclear protest in Amman, May 31st 2011. Photo by: Hamza Omari

One of the first controversial points was its location and especially so after moving the reactor to Mafraq, a city well known for its tribal population. Since tribal dynamics govern much of Jordan’s policy-making, the voice of the people in the area where the reactor will be built comes through strong and clear, specially since the plan involves moving them out of the project area. The location itself is also relatively close the most inhabited parts of the kingdom: Zarqa, a governorate with an estimated population of 1 million, lies within the reactor’s danger zone, and even Amman, the kingdom’s capital, is less that 50km away.

In terms of cost, a similar third generation nuclear power plant is under construction in Olkiluoto, Finland. This reactor was estimated to cost 3 billion euro, yet the projects has limped from one delay to another and in 2010 was running 42 months behind schedule with additional costs of 2.7 billion euro. The project is managed by AREVA which will also build the Jordanian power plant. This is creating a lot of argument in the country given the less than encouraging track record of AREVA in different parts of the globe. For Jordan -where foreign aid makes up the greater part of its national budget and whose sky rocketing debt exceeded 15 billion dollars at the beginning of 2011- this will create a huge amount of pressure financially and politically, especially given the reduction in aid  given it due to the global financial crises and political issues.

I participated in a public debate organized with help from the Heinrich Böll Foundation in Amman last June about the  Pros and Cons of Nuclear Energy, where each side was represented by first class specialists and officials who skillfully put the arguments for the side that they stood for. The Jordanian government was represented by Dr. Kamal Araj JAEC Deputy Chairman who showed an extremely aggressive attitude toward the clear majority of the audience who were against the program. In spite of his extremely good academic training, Dr. Kamal was at a loss to supply convincing answers to all the doubts and questions that circulated in the hall. What we got instead was a stubborn – and typically Middle Eastern – attitude that attempted to force the idea on us rather than making us believe in it. From what I witnessed that night and in my opinion, I believe that one of the most essential points that have not been discussed fairly is who has the moral authority to proceed with or halt such a project. Given that the country is going through a never ending debate about the shape of reform to be undertaken, that its parliament is completely unqualified to deal with such a sophisticated agenda and that the  government is jumping from one corruption scandal to another, I personally think that such a decision can’t be reached without public participation.

A Jordanian Muslim Engineer that his concerns don't only circle around numbers ...