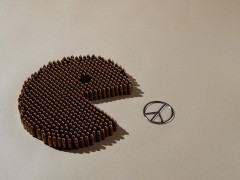 “Is it for faith to deliver peace, when on all sides inequity thrives for it shall indeed thrive, when the blessed walk past blissfully blind, content in their own moral purity, in the peace filling their souls? Oh, you might then reach out a hand to the wretched by the roadside, offering them your own footprints, and you may see the blessed burgeon in number, grow into a multitude, until you are as an army. But there will be, will ever be, those who turn away from your hand. The ones who quest because it is in their nature to quest, who fear the seduction of self-satisfaction, who mistrust easy answers. Are these ones then to be your enemy? Does the army grow angered now? Does it strike out at the unbelievers? Does it crush them underfoot?“

(Steven Erikson, The Malazan Book of the Fallen, Book 08)

WE hate THEM, not for who or what they are, but for how they make US feel. A flimsy notion? Not really. It is what defines every action that we perform.

“No justice, no peace!” chanted protestors in Manhattan after the racial incident in 1987. Many psychologists agree that Abubadika Sonny Carson, the activist who coined the slogan, managed to pithily describe the essential psychological pre-requisites for peace.

But is it really so? Are human beings magically endowed with peace when justice has been served? What is justice? Is justice punishment for breaking laws; the availability of food, water and shelter for the poor or luxuries for the rich? How would you describe justice?

Going back to my analogy about people with better video games, what would be just in that case? That someone takes away all the video games from that person and gives them to me? Or that someone buys me all the video games I want. Either of these situations will make me stop feeling jealous thus eradicating my dislike for them. But is either option really fair?

Additionally, being the flawed human being that I am, this new situation will create other, equally unsavoury, emotions like pride and greed, not to mention the smirk of “I’m better than you” when I meet those people next.

Justice, in my opinion, is a relative term. What might be just for one person may be an outrage for another.

So how is peace possible? Peace has a number of connotations: the inner peace of an individual, the peace within a family, a community at peace with its members or world peace. What guarantees peace?

If there can be no world peace until each individual has achieved inner peace, what happens when such a Utopia has been created? Hypothetically, let’s say every one achieves inner peace. Would this lead to world peace? We need to remember here, that this kind of peace would entail the end of all aspiration and progress, which would, in turn, lead to discontent and dissatisfaction. So, would this kind of peace be a lasting peace?

My next question: is it even possible for an individual to achieve such a feat? Sure, some people extend an outward semblance of peace through the facades they have created around themselves with their wealth or the shield of their religions. But are they truly content? Does the wealth, the faith, the belief in rewards after death foster inner peace or the veneer of it?

Human beings are, by default, dissatisfied beings. This is not, as much as you would like to believe it, a generalization. Look around you. Take a peek into the life of a single individual and you will see cracks; cracks in that finely polished disguise of peace and satisfaction. He is wrought by indecisions, uncertainties, suspicions, doubts and a myriad of emotions he struggles to keep in control.

It is only when something happens to challenge this outward semblance of contentment that the cracks gape wider and the entire plethora of negative emotions spills out, driven by all that had been trapped in there.

Then we see riots, protests, burning, deaths and hate; above it all there is hate.

The International Day of Peace aims to remind us of the importance of world peace. However, how do you attain world peace when there is no individual peace?

Perhaps, the best form of peace we can hope to achieve is the one that comes of controlling our negative emotions and learning to live with them; the kind of peace that comes from tolerance not love or justice.

Maybe this is just my opinion. What’s yours?