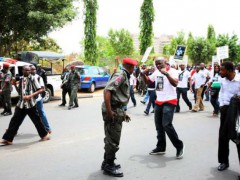 Thinking of what we now know as Enough is Enough Nigeria always leaves me with three feelings:

It was one email, one random Friday afternoon. Late President Yar’adua was terminally ill, unavailable to lead the country, and so many ‘leaders’ arose and plundered, taking turns to rape an already battered country. No one could ascertain whether he was alive or dead, no one had access to him, and there was no talk of a succession plan because some people had sworn they would rule by proxy.

And then I got that email from Chude, asking “where is the outrage;” wondering how Nigeria’s youth demographic, about 65% of Nigeria’s 150 million strong population, was going to stand by and do nothing while evil doers ensured there was no Nigeria left for us. My favorite line from that email was, “We are in the majority. We have the power to actually make change happen. So what is our excuse? What will we tell our children – that we lay down and took whatever they hit us with?”

We couldn’t have been more than 20 copied in that email that led to the ‘Enough is Enough’ protest to the National Assembly on the 16th of March 2010.

I remember the nights leading to it; the nocturnal meetings, and the letters we wrote. I remember all of us having made the decision not to join the ‘Save Nigeria Group’ rally which was held around the same time, refusing to be the ‘pop culture element’ but making a statement of our own. I remember reading up on the possible things that could go wrong during a protest, and gathering tips like onions countering the effects of teargas. Now that I think of it, I wonder what would have happened if we really had to use onions on the day.

And so on this day, exactly five years ago, I was at my cubicle at the BBC, having received a stern warning from my late aunt (God rest her soul), not to join any protest. Matter of fact, she’d made me wear a skirt and heels to work so I wouldn’t be able to go.

At 9am, my colleagues Alkasim and Matilda, disappeared from the office for various reasons, but I stayed, trying to be obedient. By 10am another colleague asked me to leave because I wasn’t being useful; that’s how restless I was. I caught a cab home, changed into trousers and my Enough is Enough tee shirt (which I still have), and ran to Eagle Square.

The most beautiful rainbow kissed the clouds that morning, and I remember a few of us getting emotional because God was literally smiling down on us.

And then we set out, voices and placards raised, demanding that our government keep the promise they made about 6000MW of electricity generation, and stop the fuel crisis that was the stuff of legend.

There were many moments I will never forget from that morning, like Dele Momodu pushing through the human barrier the soldiers formed on the way to the National Assembly, Audu Maikori almost getting shot, and the absolutely scorching sun. I also remember musicians like Omawumi and others leading us in song, and I remember almost falling out of one of the trucks. I remember the Sergeant-at-Arms saying he wasn’t aware of our gathering and procession, when he had in fact received our letter days before. And yes, I remember Alkasim, Matilda, and I almost getting questioned for leaving the office.

From ‘Enougha Enougha’ on Facebook, Enough is Enough (EiE) was registered (in a very roundabout way that still makes me smile), and through the Register, Select, Vote, and Protect (RSVP), #ShineYourEye, #OurNass, election debates and monitoring, Revoda, etc. continues to work with other organizations (local and international) to ask questions of our leaders, and demand some sanity in the chaos that is sometimes us.

That protest laid the foundation for the #OccupyNigeria and #BringBackOurGirls movements, simply because it showed that young people are aware, care, and dare to force good governance from those who have the privilege to serve.

Here’s a big happy birthday to EiE, to the inaugural board and leadership, and to Yemi Adamolekun, who has steadily steered this ship through it all. May our oil never run dry, our arms never go weary, and may we see this Nigeria we dream of sooner than later.