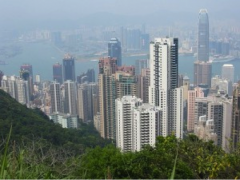 The recent public scuffle (see YouTube video above) between a mainland Chinese family and Hong Kong commuters may have been a mere indication of a broader cultural clash. It took little to ruffle nationalist feelings – prior to this, girls snacking on trains were not seen as sparkplugs for protests. The furor was created when a passenger asked for said girl to stop eating and littering, to which her mother merely dismissed, laughing at his mangled Chinese. Enraged, more Hong Kongers joined in the verbal war and, in a dramatic climax to events, forced the mainland family off the train. However, this public display of disaffection did not just end there. Within hours, online forums and chat rooms were buzzing with anger. The Chinese people’s favourite response was still that of Professor Kong Qingdong, who lambasted Hong Kongers as “dogs to the colonialists”. In retaliation, other netizens started spreading a music video that compared the Chinese to “locusts” swarming into Hong Kong.

Although Hong Kong and China hardly have real racial differences, the difference in political climate and the imagined ethnic culture disparity of the two states have resulted in both sides perceiving the other to be radically dissimilar.

The cultural chasm can be seen in the fundamental ideology of the two entities. Hong Kong, a city that views itself as more liberal and progressive, naturally chafes against its mainland bonds. Hong Kong residents pride themselves in being more “cultured” on the account of their greater affinity with Western ideals, and openly disdain their mainland cousins for not having the same freedoms as they do. China conversely sees Hong Kong’s reunification in 1997 as a favour extended to a troubled relative who is now biting the hand that feeds them. The inability of most Hong Kongers to grapple with Mandarin creates the narrative for mainland Chinese to resist their “inferior” cousin – a foreign entity too liberal and too different for China’s liking. Indeed, the extent of Hong Kong’s liberal divergence is seen in how it prides itself on the freedom of its press, and has assiduously avoided the draconian censorship laws imposed in mainland China.

The second perception of Chinese mainlanders is that they are competing with Hong Kongers for their resources – from jobs, to housing, to waves of Chinese mothers preferring to give birth in Hong Kong to circumvent the One Child Policy. In addition to cultivating resentment towards mainland Chinese, increased immigration has also created undue stress on Hong Kong’s infrastructure. With swelling hoards of Chinese immigrants entering Hong Kong, authorities are feeling the heat from the annual Hong Kong protests; last year saw an unprecedented turnout, with the public angrier than before. Professor Carla Lim, a Hong Kong citizen currently lecturing at Singapore Management University echoes this sentiment, stating that “many Hong Kongers don’t ‘think’ their culture is different from the mainlanders; they know it is very different.  The history of Hong Kong has left a legacy that makes it unique.”

What Hong Kong is experiencing may well be the effect of post-materialism and a desire to retain their colonial legacy of democracy. But more than this, Hong Kong has already developed its own brand of nationalism – one that it is loathe to cede to China. Recently, the Hong Kong public took to the streets in an outright rejection of a Beijing-sanctioned moral and national education syllabus, a move by Hong Kong politicians to foster patriotism towards the mainland China. Many participants in this 10-day protest clearly do identify themselves not as Chinese, but as Hong Kongers.  Their heated demonstration goes to show how Hong Kong has come a long way for a nation that used to be just an annex of a greater power.

Worse, these scuffles and protests are only a microcosm of the struggle between two politically and culturally disparate systems in a single country. With no policy in sight by Beijing for cultural bridging, the road leading to 2047, when Hong Kong loses its right to a democratic system, looks set to be a tumultuous one.

Danielle Goh is a member of Global21, a student network of international affairs magazines and a partner of FutureChallenges. A longer version of this article was first published in The Singapore Globalist.