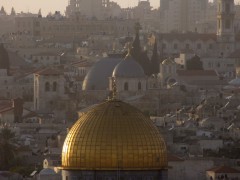 Jerusalem: The backdrop on which ethnic tensions are played out. CC by Alastair Croll via Flickr.

On January 11,  2012, the front page of popular Israeli newspaper Yedioth Aharonoth featured a chilling photograph of three young Ethiopian Israelis. Their faces were painted white with deep black rings around the eyes and grotesque lipstick smiles. They formed part of a 3,000-strong demonstration protesting racial discrimination in Jerusalem. “I painted my face white, not because I am ashamed of the color of my skin, but because I wonder if my life as a discharged soldier could be better if I was white,” explained an Ethiopian protestor.

Knesset Member Sofa Landver, Minister of Absorption and Immigration and a member of the right wing Yisrael Beitenu party, fanned the flames by remarking publicly: “The gap between people of Ethiopian origin and other Israelis is a gap measured in years, but the State of Israel has done everything to absorb them in the best possible manner…so say thank you for what you have received.”

There are now around 125,000 Ethiopians in Israel – almost 2% of the population. Although the older generation struggles with economic, social, and linguistic adjustments, Ethiopian youth attend Israeli schools, speak Hebrew, serve in the military, and have been generally assumed to be on a smoother path towards integration. But protest banners like “Our blood is only good for wars” and “This is our land too” reveal feelings of inequality.

Unfortunately, though, the Ethiopian predicament rings familiar. The protestors’ messages and Landver’s cool response resemble the discourse of the entrenched rift between the Israeli state and its Arab-Palestinian citizens. Unlike Ethiopian Jews, Arab-Palestinians are an indigenous population. Comprising about 20% of Israeli citizens, this community has long protested its marginalisation. Politicians and advocates frequently criticise the state for treating Arabs as “second-class citizens.”

Landver’s recent remarks expose an unsettling bias. The notion that Ethiopian immigrants should be “grateful” despite the grave economic and social challenges they face within Israel implicitly points to external strife, such as civil war, to deflect questions about internal inequalities. The argument that Israel has done more for these struggling communities than other countries more explicitly animates the rhetoric around the Arab-Palestinian minority.

President Benjamin Netanyahu was quick to respond to Landver’s remarks and, though refraining from personal criticism, he emphasized that racism is “infuriating” and has no place in Israeli society. Yet his 2011 interview perhaps exposes an acceptance of different standards for different ethnic communities. Netanyahu repeated a third time, “Israel is the only place in this entire expanse where Arabs and Muslims enjoy complete freedom.” When this status is disputed, a consistently outward-looking approach would have a coarse answer at the ready: What’s the problem? They’re still better off here than elsewhere.

It is significant, of course, that Ethiopian and Arab groups enjoy freedom of speech and the protected right to such vocal protest in Israel. Globally, though, Israel’s legitimacy as a liberal democracy comes under increasing scrutiny and criticism. Addressing the estrangement of minorities both immigrant and indigenous is critical for the vitality of a state that holds democracy, diversity, and immigration at its core.

Ultimately, whatever the government rhetoric, it will be real social and economic grievances – internal and not external conditions – that define the experience of a new minority generation, whether born to Ethiopian immigrants, indigenous Arab-Palestinians, or any other group in Israel’s diverse demography.

Simon Williams is a member of Global21, a student network of international affairs magazines and a partner of FutureChallenges. A longer version of this article was first published in The Oxonian Globalist.