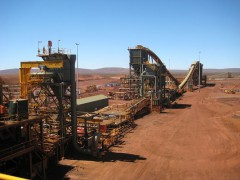 In economics there’s a saying that a rising tide lifts all boats. However, this old adage, which implies that a flourishing economy financially benefits all  participants, does not necessarily hold true for Indigenous communities in the Pilbara region of Western Australia.

For the past four decades, Australia has experienced the largest mining boom in its history, driven by significant demand for its low-cost mineral commodities, particularly iron ore, from China, from Depots für ETFs, India and other developing countries in a resource-intensive phase of development. One major supply-region of these raw materials is the Pilbara, from which 20% of the world’s iron ore is extracted. Yet while regional resource projects have contributed to increased national economic growth and significant profits for privately owned mining companies, the benefits drawen by local Indigenous communities are not so readily apparent.

It’s true that in more recent years, corporations, arguably in pursuit of a social license to operate, have made some progress in redistributing the economic benefits of mining to the Indigenous custodians of the Pilbara. This has been primarily achieved through collaborative agreements with Aboriginal communities. Just this year, for instance, Rio Tinto signed an agreement with the Yinhawangka people to promote Aboriginal employment opportunities in the company’s mining operations and establish mining exclusion zones to protect culturally significant and ecologically sensitive sites.

Image by Calistemon via Wikimedia Commons, CC BY SA 3.0

However, the reality is that the majority of the 31 Indigenous groups in the Pilbara have not derived tangible benefits from the mining boom. Michael Woodley, Aboriginal Elder and CEO of the Yindjibarndi Aboriginal Corporation, has commented that companies mining in Aboriginal communities have failed to fulfil their corporate social obligations to invest in meeting the basic needs of Indigenous people.

In particular, he says that mining companies have a social responsibility to redress employment disparities in the region. Despite years of substantial economic development in the Pilbara and an unprecedented demand for labour in the regional economy, the Indigenous unemployment rate of 13.8% still remains significantly higher than the broader rate of 2.5% across the overall Pilbara demographic.

Even though Indigenous locals are willing to participate in regional extractive industries, and mining corporations such as Rio Tinto have attempted to promote Indigenous employment strategies, the ability of the Pilbara’s Indigenous population to benefit from employment opportunities continues to be constrained by substandard levels of educational attainment.

In terms of participation in regional economic development, educational achievement is a key prerequisite, yet with only 25% of Indigenous children progressing past Year 10 (the last compulsory year of secondary school) compared to 54% of non-Indigenous students, Aboriginal people lack the essential skills needed to enter the mining labour market. In order for the potential supply of Indigenous labour to be tapped by mining companies, increased investment in educational infrastructure and remedial training should  be made a number one priority corporate interest. This is investment that will provide benefits to local communities even after the mining boom declines.

At present, however, to fulfil the open demand for labour, mining companies are engaging the services of fly-in fly-out workers. This in-migration has not only eroded employment opportunities for some locals, but has also placed considerable demand-side pressure on the housing market, resulting in hyperinflation in rental rates.

The average weekly rent in some areas of the Pilbara has rocketed to $2000, which compares to a national average of only $285. Given the high Aboriginal unemployment rate, it is not surprising that Indigenous homelessness in the region is currently at record levels.

Such high inflation on the rental market has even impacted on those living in government-subsidised housing, and has created a paradoxical situation in which low-income earners, a large proportion of whom are Aboriginals, who progress into higher-paid employment may find themselves surpassing the means-tested threshold for public housing eligibility, and thus be forced into the currently unaffordable private rental market. Even so, with mining companies now constructing new accommodation to ease the unsustainable demand for housing, it is hoped that rental rates will once again decline to more affordable levels.

It is evident that the mining boom has brought some negative impacts to the Pilbara in the shape of less affordable housing due to strong pressure on rental markets. However, we have to remember that mining also has the potential to address the existing socio-economic disadvantages facing Aboriginal communities in the region. Corporations such as Rio Tinto have already attempted to provide employment opportunities for Indigenous people in the Pilbara. Yet, to build upon these efforts, mining companies still need to invest much more strongly in the local training and educational infrastructure. In this way, Indigenous communities will not only be able to take advantage of the employment opportunities generated by these companies, but will also benefit from the mining boom for generations to come.

To listen to a radio-documentary by the ABC on mining in the Pilbara, click here.