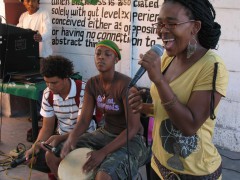 Sixty-five percent of Africa’s population is under the age of 24, with over 40 percent of the total population below the age of 16, and about 25 percent between the ages 15 and 24. The issue of education is a recurring theme in conversations about Africa’s youth. World Bank data shows that in Burkina Faso, Ethiopia, and Mozambique more than 75 percent of out-of-school youth have no “education at all.”

In a study of 13 African countries, findings showed that rural youth are less likely to be in school, and urban youth (except in Kenya) tended to have greater educational opportunities. However, rural youth often joined the workforce earlier and were less likely to be unemployed, compared to their urban counterparts (except in Kenya and Ethiopia) who saw longer periods of inactivity as they transitioned from school to work. In a 2008 World Bank executive summary entitled “Youth in Africa’s Labor Market, it was noted that:

“In 8 of the 13 countries reviewed (Cameroon, Ethiopia, The Gambia, Kenya, Malawi, Mozambique, São Tomé and Principe, and Zambia), young people face about five years of inactivity before finding work; youth in Uganda are inactive for more than three years on average. The transition duration is just one year in Côte d’Ivoire and almost seven years in Mozambique, suggesting that vulnerability to unsuccessful transition varies greatly across countries.

Even after education attainment, African youth across the continent face periods of inactivity before being able to productively participate in the labor market. Even within the labor market, employment among youth is highly unstable, mostly concentrated in the informal and agricultural sectors.

This instability further exacerbates African youths’ vulnerability, and for this reason, they are vulnerable to trafficking in persons. Contrary to popular perceptions, African youth who have educational attainment are among the millions of victims of trafficking. Initiatives such as the African Union Youth Volunteer Corps (AUYVC) hold promise in offering avenues for Africa’s youth as they seek employment.

One of the listed objectives of the AU’s Youth Volunteer Corps is to “provide opportunities to Young Africans to serve and gain crucial professional experience, soft skills, social competence, international exposure and leadership skills.” Youth Volunteers are sent to serve and work for twelve to twenty-four months, within rural community schools, hospitals and health centers, post-conflict settings, international organizations and government offices/ministries in Africa’s 54 countries.

Requirements include African citizenship (or African Diaspora with non-African citizenship), age range 18-34, post-secondary educational attainment (either training or a degree), and knowledge of one or more AU language (Arabic, English, French, Portuguese).

As economic growth and demand for skilled labor in post-Apartheid South Africa’s labor economy has increased, demand for unskilled and semi-skilled labor has gone down. This, coupled with a small informal economy, contributes to South Africa’s  31 percent unemployment rate. In response, the South African government launched Community-based Public Works Programme (CBPWP), which worked to foster job creation, asset creation, skills development and infrastructure provision through work for women and youth. The program was phased out in April 2004 with the creation of the Extended Public Works Program (EPWP) under the umbrella of the Department of Public Works.

In 2006, International Labor Office (ILO) Director-General Juan Somavia said, “Jobless growth isn’t just bad social policy, it is bad economics. It results in less consumption, more migration, more child labour and lower aggregate demand.”  Also, as pointed out in Work in the Developing World, growing GDPs are not synonymous with shrinking levels of socioeconomic inequality. In fact, as growth speeds up, so does inequality.

For this reason, job creation is expedient. As governments, private industry, supranational organizations and civil society organizations grapple with job creation and addressing the gap between education attainment and employment amid a recession, they must consider these factors.