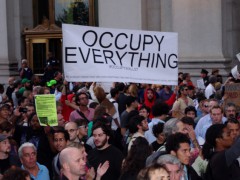 The American media has been awash with jubilant exaltations of Occupy Wall Street (OWS). However, despite many claims, the movement is not a transformative revolutionary force. While indubitably there is a small core that is committed to dramatic, even revolutionary, change, they are not representative of most Americans, or even, arguably, of most protestors in the streets. Accordingly, OWS will not have the dramatic impact championed by the chattering class.

Truthfully, most Americans are not in agreement with the general, inchoate message of OWS. They do not want to tear down capitalism, implement radical wealth redistribution, or end private property. America is a center-right country. As of August 2011, approximately 77% of Americans identified as moderate or conservative (36% and 41%, respectively), with only 21% identifying as liberal.[1] A mere 6% identified as very liberal—presumably those who might agree with the core message of OWS.

So what is bringing people out to the streets? At best, one can describe OWS as a steam valve for economic dissatisfaction. Many Americans are deeply concerned with currenteconomic conditions. But they also understand that these are marginal problems within the system and are not indications of systemic failure. They want reform, not revolution. The American system has offered too many benefits to too many people to be easily (or willingly) discarded.

General economic consternation has combined with a few motivating characteristics of the American left to create the OWS crowds. First, the American left is enraptured by the David-and-Goliath complex, where those who have power (eg. Wall Street) are morally castigated simply because they possess clout. Second, many on the American left romanticize protest and civil disobedience.[2] As many of the slogans and placards indicate, protest has become an end unto itself, not merely a tool to achieve political goals. Finally, the American left is driven by a sort of cognitive dissonance, particularly amongst the “hipsters” who constitute a mainstream counter-culture: a hypocritical, rejectionist elite group that serves as a large portion of the “base” of OWS.

These factors have developed a movement that bases its identity in rejecting the authority of the system—“stickin’ it to the man”—but has little true political agenda. OWS looks to its idealized forbearer, the 1960s protest movements, for guidance.[3] However, the contradictions of the system that drove some of the protests in that era do not exist today, leaving OWS with little firm footing to stand upon. No revolution is needed; no downfall of capitalism is wanted.

A movement grounded on such a foundation cannot be a viable political force. Despite media exhortations to the contrary, OWS is not like other protests, past or present. In fact, it may be unfair to even call it a protest. It is not comparable to protests in Europe, where the social contract has been or is on the verge of being broken and people are fighting (sometimes literally) to define the economic and social construction of the system. Nor is it anything like the Arab Spring where people are demolishing years of tyranny and oppression, hoping to establish something new. Likewise, OWS is not a rebirth of the 1960s, where Americans protested the hypocrisy of a system that discriminated against a segment of its population.

In some ways, today’s American left is jealous of its parents’ protests and the unbridled passion it sees around the world. It wants to (re)capture that spirit, so it gropes around for its Goliath. The amorphous “other”—caricatured by Wall Street—is blamed, as has become all too common in American society. But when the temper tantrum stops, very few want to undermine the system. They may clamor for changes, but these are at the margin; hiking a tax rate a few percentage points or closing meaningless loopholes on private jet owners. Even Wall Street, despite incidents of fraud and corruption, has a meaningful and necessary place.

Life in America, for all its ills, is far too good. Most Americans, most OWS foot-soldiers, would be uncomfortable with what would be demanded or come out of the movement should it develop a real cogent agenda. This is part of the reason why OWS still remains largely incoherent. If it advances a truly revolutionary platform, it will lose a vast majority of its current support.[4] If it develops a policy agenda conducive to its center-of-gravity, it will become a neutered political wing of the Democratic left.

Some in the media and the global community have latched on to OWS as a sign of great change in the US. It is not. The movement is not real, nor is it likely to ever become so. It is an act of playing dress-up. It is spouting off a little steam and a celebration of the romanticized role. But the people will go home—maybe with a few reforms in their pockets—and the American system will persist.

[4] America has no real socialist party or even, in the European mold, a social-democratic one.