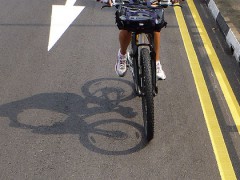 Anyone can learn to ride a bicycle. But in Singapore, one big question remains: Will you dare to? The clash of attitudes between vehicle users and cyclists, coupled with the fringe presence of a reckless cyclist racing sub-culture, may explain why the cycling culture has failed to take off in Singapore.

The potential of bicycle commuting

A flourishing culture of cycling naturally encourages people to increasingly turn to cycling as a transport alternative. Bicycling reduces traffic congestion in spatially constrained Singapore, when used as a substitute for motorized vehicles. Moreover, the proximity of destinations island-wide makes a strong case to promote cycling as a feasible means of getting around.

Furthermore, cycling is an environmentally friendly mode of transportation that could help reduce pollution in the city. It also has undeniable health benefits for the regular cyclist.

Yet, in Singapore, bicycle commuting is far from reaching its full potential. Cyclists tend to view motorists as aggressive and unaccommodating. Motorists, on the other hand, find many cyclists reckless and errant. Differing attitudes have led to little compromise and minimal improvements in our cycling environment.

Cyclists clad in racing gear and sporting flashy bicycles worth thousands of dollars are on the rise. Local riding clubs plough the streets everyday, even during pre-dawn hours. Yet, this trend largely remains a “fringe sub-culture”. In Singapore, the racing sub-culture is very much a minority group that takes pride in being exclusive. Figure-hugging spandex apparel and glossy carbon bicycles are not necessarily appealing or accessible to everyone.

Unlike in Belgium, Holland, and Denmark, where bike racing is a respected sport and commuting by bicycle is ubiquitous, there remains a great disconnect between cycling and public approval. Somehow, Singaporeans weren’t brought up with the idea of bicycling instilled in us. Most kids will not even consider riding a bike to their nearby school; they simply take the public bus. As adults, they then view the bicycle as a second-rate mode of transport. The few who are willing to commute by bike mostly belong to the exclusive community of enthusiasts. Greater inclusiveness is vital if Singapore is to embrace cycling as a culture; a culture that can reduce congestion and preserve the environment.

One challenge commuting cyclists face is the absence of expedient biking routes. While the few local park connectors we have were built specifically for cyclists, they are designed for recreation, not routine commuting. Cycling via the park connector takes more time, requires dismounting every so often, and doesn’t really lead to anywhere important. Commuting cyclists would rather share pathways with pedestrians, who often express irritation at having to “watch out” for these cyclists.

Unfortunately, it is illegal to ride on the pedestrian paths in Singapore. Unlike Denmark, we have no dedicated bicycle paths on the roads. Considering our spatial constraints, we cannot afford to limit bicycle usage until a whole new dedicated network surfaces. This leaves motor roads as the most feasible option for bikers.

Here, the problems perpetuated by an abrasive racing sub-culture surface again. Road cycling currently borders on the brink of showmanship – zigzagging between lanes, fast cornering, out-peddling one another… the list goes on. The frequency of cyclists not abiding by the traffic signals and the many near accidents with motorists further creates the impression that cyclists are irresponsible and their behaviour dangerous.

Still, there may be hope

The growing presence of serious cyclists can develop greater acceptance of cycling over time, if properly cultivated. We need to first eliminate the negative image associated with the local cycling scene. Infrastructural improvements alone will not solve the problem; at the heart of it, the racing sub-culture renders the bicycle a dangerous contraption on the roads.

It may sound idealistic, but it is only through education, such as nationwide campaigns that address cyclists’ road behaviour and our expectations of them, that we can achieve social acceptance of the sport. Improving the current reputation maintained by recreational cyclists would go a long way towards promoting cycling as a viable mode of transport. By simply letting the racing sub-culture indulge in reckless behaviour, we risk accentuating the differences – sport versus commuting – within the cycling community itself. Without consistency, it is difficult to convince society at large to embrace a cycling culture.

Although our local culture may not be conducive for road biking, people who want to ride will somehow find a way to do so. A change in mindset is a prerequisite for Singapore to embrace an activity that could provide some breathing space on our increasingly congested island.

Let’s give the joy of cycling back to the people.

Marcus Leong is a member of Global21, a student network of international affairs magazines and a partner of FutureChallenges. A longer version of this article was first published in The Singapore Globalist.