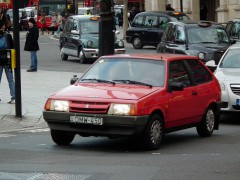 As ever more Hungarians decide to leave the country, Hungary faces a creeping social crisis. Who will replace those young talents who emigrate? And what effect will this have on the way we Hungarians define ourselves?

A Hungarian Lada on the streets of London. An image by kenjonbro on FlickR – CC BY-NC-SA 2.0

To understand such questions, you have to dig deeper into the history of the country and the region as well.

In their collective memory, Hungarians regard themselves as citizens of a country lying at the Eastern border of the West. The decision of the first rulers to convert to the western form of Christianity had far-reaching consequences. After the Mongol invasions and Turkish occupation that lasted 150 years, a new element of national identity came to the fore. We increasingly started to regard ourselves as the protectors of the West and Western Christianity, who ungratefully let us down from time to time, and failed to give us a helping hand in times of need.

The idea of the total annihilation of the Hungarian nation had become a popular dystopia by the 19th century. This bred anxiety about the eventual disappearance and dissolution of the Habsburg Empire. Thus, after 1867 when Hungary gained wide-ranging autonomy within the Empire, the early promising signs of ethnic groups living together side-by-side in one country never materialised. The hostile attitude of Hungarian policymakers towards ethnic minorities lead to discontent among these groups who were happy to join other countries at the end of World War I. Although by the final years of the Habsburg Empire Hungarians constituted the biggest ethnic group in Hungary, we were hardly in the majority. Thus the break-up of historic Hungary left millions of ethnic Hungarians living in other, newly formed foreign countries. This shock has still devastating effects on our national identity. A homogenous nation-state is part of our national identity, but the nation is also scattered all around the borders in neighbouring countries. The fact that within the new borders only Jews and Roma were left as tangible minorities did not help either. An increasing distrust of strangers became ever more pronounced. In the light of all these factors, it might be easier to understand why the far-right is alive and well in the country.

A Hungarian far-right demonstrator with a T-shirt showing contemporary Hungary and its lost territories. An image by habeebee on FlickR – CC BY-NC-ND 2.0

But with ever more young people wanting to leave Hungary to work or study abroad, the country faces the challenge of making up for the talent lost in the brain drain. So from where should we make good for all those who decide to leave?

The first obvious choice would be the pool of ethnic Hungarians left on the “wrong” side of the border. But luring even more of these people over would risk making those ethnic minority populations collapse, and thus occasioning the loss of part of the Hungarian heritage. Besides which, a portion of the heritage of all those countries with Hungarian minority groups would also be lost forever. This would not be something unique in the region. For instance, Romania has already lost much of its German minority population. Some on the Romanian far-right would love to see the Hungarians go as well, but I think both cultures would lose if that were to happen. Besides, the appeal of Hungary is decreasing for ethnic Hungarians given the economic limbo the country now finds itself in.

The ruins of a abandoned German church in Malcoci, Tulcea, Romania. An image by zedworks on FlickR – CC BY-NC-SA 2.0

Another solution would be the import of another foreign workforce. However, this would result in a massive influx of foreigners. It is not difficult to see why this would cause serious problems. According to a recent survey, Hungarians distrust foreign people so much, they are even afraid of those who simply do not exist. If that is so, what can we expect with regard to the ones who are very much alive and kicking and happy to settle down among us?

Challenges arising from the freedom of movement we need to accept as a member of the EU are unquestionably major concerns. And if bright young minds keep leaving the country, we have to rephrase some old questions: What makes you a Hungarian? Who is welcome and who is not? And why is Hungarian national identity so exclusive?

If we do not tackle these issues very soon, we might end up in a similar situation to the one we were in 100 years ago, facing another social breakdown caused by alienated minorities.