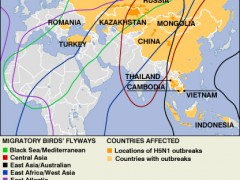 In September 2011, Ron Fouchier of the Erasmus Medical Centre stood at a scientific conference in Malta and announced that he had created a mutated strain of Avian Influenza that could be the deadliest contagious disease in history. Concurrently, Yoshihiro Kawaoka from the University of Wisconsin also claimed that he and his team of Japanese and American researchers had created a similar strain. It’s a big claim to make considering the 1918 Spanish Influenza killed over 50 million of the world’s citizens. But were they wrong?

Ever since the 1918 outbreak of Spanish Influenza, epidemiologists have long considered the lethality of pandemic influenza. However, controversy has surrounded the research that Fouchier and Kawaoka have been conducting on the H5N1 influenza virus, otherwise known as Avian or Bird Flu. Since its re-emergence in 2004, the US Department of Health and Human Services estimated that of the 565 people infected, 331 died – close to a 60% human mortality rate.

Working separately, Fouchier and Kawaoka engineered a set of mutations that would make the Bird Flu able to spread amongst humans without diminishing its lethality. The furore that resulted divided experts on bioterrorism, influenza, virology and national security; and left them with one question – do they publish their results, or keep it secret?

Both researchers submitted their papers to Nature and Science – two prominent scientific journals – with the expectation that it would be published. However in December 2011, the National Science Advisory Board for Biosecurity (NSABB) took an unprecedented move: they ruled that the two papers be censored if published and their methodology and techniques be deleted in order to mitigate the risk that this information could be used to create a bioweapon.

The NSABB argued that these studies are necessary for better understanding these viruses, in turn helping them understand how to prepare for and fight them. But does that justify the study as a whole?

In 2001, Australian scientist Ian Ramshaw from the Australian National University accidentally created a strain of smallpox – called mousepox – bearing a 100% mortality rate. The 35% mortality rate of Smallpox pales in comparison to that of mousepox, and smallpox was declared eradicated in 2011.

While this kind of genetic research may spur the creation of necessary vaccines – as it did for Polio and Ebola – it shows how easily viruses can be replicated and mutated from written information. The potential for the results of Fouchier and Kawaoka’s research to be replicated in less than secure circumstances, by those with distorted ethical compasses, presents a grave security and public health risk.

Governments are now contending how to deal with future experiments that could raise similar concerns. The aim would be to prevent a repeat of this scientific storm, while also making sure beneficial research isn’t stifled.

Addressing the Biological Weapons Convention in Geneva, US Secretary of State Hilary Clinton warned “the emerging gene-synthesis industry is making genetic material widely available. This obviously has many benefits for research, but it could also potentially be used to assemble the components of a deadly organism.”

Nuclear conflict is useless in a world where a virus can kill an entire population and leave its wealth intact. The issue thus remains: governments need to find the balance between scientific advancement, ethical considerations, and public health and security. And we should note the question posed in the Hollywood thriller Contagion when a CDC scientists is questioned:

“Is there any way someone could weaponise the bird flu? Is that what we’re looking at?”

“Someone doesn’t have to weaponise the bird flu,” the CDC scientist responds. “The birds are doing that.”