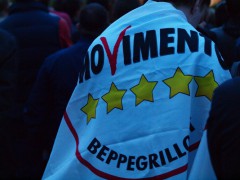 Austerity has never been mentioned in the Italian debate until now, unlike asperity, a lighter word that also implies future perspectives of growth.  The promise of a path of asperity leading to economic growth has been the ‘mantra’ of Mario Monti’s government, and Enrico Letta, the current prime minister has often stated that the strict time of asperity is now over.

The Italian public’s opinion on asperity is divided between a small group of supporters and widespread disapproval, and was mirrored in the impressive gains of the Freedom Party and Five Stars Movement in the last elections. Supporters of austerity such as Alesina and de Rugy stated that Monti’s government has chosen the wrong version of fiscal discipline which has led to excessive tax hikes and not to much needed cuts in public expenditure.

A Five Stars Movement activist (Photo by Riccardo Palazzani, on Flickr ,CC BY 2.0)

In fact, fiscal pressure in Italy has reached impressive peaks during Monti’s government and in its intentions fiscal discipline should have favored further economic growth. The equation Austerity+Fiscal Discipline=Growth appears to be the winning one, but if we look at the last Eurostat report  we can see an increase of public debt, including in those countries where the ‘bitter medicine’ has been administrated, even in Ireland, austerity’s ‘enfant prodige’.

There are few voices in favor of  a return to the Italian lira (such a return would be very dangerous both in the short and the long term) and the views held by European institutions are now widely resented. On the other hand, it is important to underline the fact that in general the Italian media and public opinion has always shown little interest in European affairs but that interest has now been rekindled by the eurozone crisis.

The social impact of the crisis is anyway relevant, given the fact that Italy, like the rest of Mediterranean Europe, is not provided with any proper welfare system. Measures such as guaranteed minimum income are hardly topics discussed in policymaking debates and what welfare provisions there are are actually furnished by families and the voluntary sector. The Italian production system relies on SMEs – a sector in turmoil with little innovation and facing severe issues of competitiveness in a globalized market. The fact that the Italian banking system is facing liquidity issues is yet another major problem.

Given its current situation, Italy is experiencing a certain increase in the level of unequality which impacts most on vulnerable groups as reported in Caritas Europa’s latest crisis report. So why hasn’t Italy seen the same type of protests that have marked Spain, Ireland, Greece and Portugal? One social reason that might explain such ‘social tranquility’ is related to the fact that Italy has not experienced the same levels of austerity seen in Greece, Portugal and Ireland. On the political front, the Five Stars Movement managed to absorb people’s discontent with  austerity measures in the last elections, even if it is not clear whether they will have a chance of really influencing economic policy during this term of government.

An austerity protest in Rome (Photo by Daniel X.O’ Neil, on Flickr, CC BY 2.0)

The Italian lesson is clear: Austerity measures are unlikely to be accepted, especially in countries where ‘sacrifices’ are not practiced by the whole community, including the elite class. Scandals about  the costs of politics make daily headline news where they vie with reports on the absurdly inflated wages of public officials, but no cuts have yet been introduced in such sacrosant fields.

European leaders and institutions need to reflect on this lesson in the run-up to European elections next year, if they are to avoid a European Parliament dominated by eurosceptics and populists.

Italy remains quiet for now, but what would happen in the event of possible economic unrest? It appears that there will be the need to practice a new equation, one that would introduce elements of a ‘Social Europe’, something akin to the European Commission’s strategy known as Europe 2020.

Such an equation would require a major step forward in European integration, a loss of Member States’ sovereignty, more obligations and a reduction of national self-centeredness in Italy and the rest of the eurozone. But is the eurozone ready to follow such a path?  Are European citizens ready for it? The answer should be yes, given the fact that the world and the EU’s competitors – are becoming increasingly globalized, and that the social and economic way out from austerity can only be reached on the Community level.

Yet the actual answer is probably no, given the tendency countries and their citizens have when feeling the pinch to attend solely to their own immediate interests and forget about the rest.