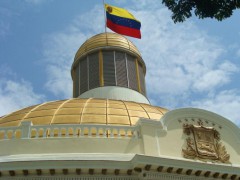 On  October, 7th this year Venezuela will hold presidential elections.

This is not just one more election. For me, as for a considerable part of the voting population, this election will be decisive in establishing whether we are a democratic and progressive country or one submerged in a personality cult and under the autocratic rule of power.

It is indisputable that we have had a different nation ever since Hugo Chávez came to power, but the story is not as simple as “before and after”. It is complex, controversial and not possible to summarize in a brief article. For some, we are on the brink of achieving the utopia of an equal society through a centralised socialist state; for others it’s the nightmare of a caudillo governing the country by his will and charismatic power. In both cases with the acquiescence – and resistance – of more or less half the population of the country.

Venezuela is completely polarized contra and pro Chávez. The response to him is more emotional than rational, a situation that drives a lot of people to the verge of tears -and I am not exaggerating! But if we take emotion out of the equation, we are left with this thread of facts or symptoms if you like, by which we can consider if Venezuela’s democracy really is in danger.

1. In the first amendment made to the constitution at the beginning of the Chávez government in 1999, the constituent assembly changed the length of presidential service in public office from 5 to 6 years with the possibility of re-election for one more period (the draft was authored by Chávez and his followers). In the previous constitution, re-election was impossible before two more periods under other presidents.

2. In a referendum to approve further modifications and amendments of the constitution in 2007, one of them was to make presidential re-election unlimited. The reason stated was that the revolution needed more time to achieve its “Bolivarian” goals. The people said no. However, in 2009 after another referendum specifically organized to approve unlimited re-election, the proposal of re-election won. The other reforms denied on the 2007 referendum were eventually implemented by special powers granted to the president by the National Assembly dominated by his party (PSUV – Partido Socialista Unido de Venezuela). So now he is a candidate for the third time, seeking to be in power for a total of 20 years and more “if God gives him health“.

3. Hugo Chávez is ill with cancer. The nature and prognosis of his illness has not been detailed but there is an endless stream of rumours, all officially denied. The elections were scheduled ahead of what was their usual date, and brought forward to October from December. The official reason given is to protect the integrity of the other two elections for majors and governors in December, and other internal elections in March. Speculation about the real reasons runs from that he is very sick and needs to ensure power for his party to that he will lose, while the government will need some months to erase the trails of corruption before the hand-over of power in February 2013.

4. Lately Hugo Chávez has said that he should win because if he doesn’t Venezuela will descend into civil war, and if he wins, the opposition will shout fraud. Public opinion has understood this as both a warning and a threat and envisages scenarios of him refusing to leave power and/or tampering with election results. It is no secret that Chávez has armed a civil militia, and that a guerrilla group,the  Bolivarian Liberation Forces (Fuerzas Bolivarianas de Liberación) which supports Chávez has flourished during his tenure.

5. Since 1999, Chávez has eroded the autonomy of the powers of the state. The judiciary, legislative, electoral, military and most of the media are all dominated by his acolytes. He has placed generals and other high ranking officials as heads of ministries and embassies, as well as directors of state industries. He has given public orders to judges to imprison people, expropriate property, etc., without due process and, what’s more,  his orders have been followed. No sector of society can act or react against the will of the president without suffer sanctions including imprisonment, accusations of betrayal and public humiliation. Officially this is denied but the reality is obvious and can be seen in his TV show and radio broadcasts that can last for hours.

6. After near 12 years of disaggregation, reorganization in new parties, controversy, boutades and assertive intervention, the opposition parties have finally united in one common front, the Mesa de Unidad Democrática (MUD – Table of Democratic Union) to stand against the charisma and autocratic power of Chávez. Finally they have reached a consensus whereby in order to restore a dynamic democracy, first the person glued to the presidential chair has to be removed, which can only be achieved by publicly electing a unity candidate and working together towards winning the elections while avoiding violence and not succumbing to provocation. The candidate elected was Henrique Capriles Radonski. There are still internal struggles among the less prominent personalities of the MUD, but nothing with real impact on its general cohesion.

7. In July, Hugo Chávez ordered Venezuela to leave the Inter American Commission of Human Rights of the OAS for a ruling against the Venezuelan government. Is this a coincidence with election dates so close?

There is no question in my mind that we are on a verge of deciding between democracy and autocracy. It is not about what Chávez has or has not accomplished as a president. That is debatable as it is for any other government, but the signs are there, some more obvious than others, that he is not a democratic politician. The process of ensuring his continuation in power through elections that wasn’t allowed by the previous constitution is evidence enough of his determination to stay in power indefinitely. Since the beginning his project has excluded dissension and been unwilling to seek consensus. And that’s the key to this election. Do we want alternation of leadership, public dissent without retaliation (read Tascon’s List), and autonomy of public powers? There is no guarantee of this happening with a change of government, it’s a bet on a new generation of leaders. But if we do not change, it is certain that our democracy will be further diminished by the continuance of Hugo Chávez in power.

This October, Venezuelans will have contradictory feelings after learning the results of the election, whatever the outcome may be. In that sense, emotion still forms part of the political equation. What is certain is that  chavismo will have secured its survival in the democratic scene if the opposition wins, which so far has focused its campaign on preaching respect and inclusion. But the opposition’s survival will be challenged if Chávez is re-elected, as it would face major constitutional reforms in the further unfolding of so-called XXI Century Socialism that will be enforced under a new six year mandate. And in that scenario, democracy in Venezuela would fade even further and could well disappear.

For more about the withdrawal of Venezuela from the Inter American Commision of Human Rights:

For more about the forthcoming presidential elections in Venezuela: