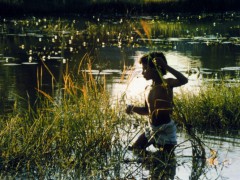 While its much affluent neighbour, India, is busy squabbling over a Right to Food Bill, Bangladesh has been busy.

Bangladesh has just launched the world’s first zinc-enriched rice variety. With a country that’s fighting acute malnourishment, and which has one of the highest rates in the world with 41% of children under-5 suffering by UNICEF estimates, this is widely seen as a great advance. This new rice has a much high zinc content at 20-22ppm, as against 14-16ppm for ordinary rice.

Yet critics of genetically modified organisms (GMO) argue a different case. They say that GMO foods disrupts biodiversity, and is stacked against the poor.  However, there is no consensus in the scientific community about the subject. But environmental and other advocacy groups have their own concerns. How this development will be received in the long term remains to be seen, but at the moment, it is being hailed as a ground-breaking anti-poverty measure.

Fish and rice are the two main staple foods of the average Bangladeshi and as such are key to combating malnourishment. Much of the land in Bangladesh is given over to rice production, and the country is quite self-sufficient in its production. Zinc is one of the three vital ingredients needed for natural growth in children and it also increases immunity to disease. Fish is a main source of zinc, yet poorer people can hardly afford it on a regular basis. Despite Bangladesh’s ready supply of fish, most people find it difficult to buy for a variety of reasons.

So zinc-fortified rice might be the answer. The Bangladesh Rice Research Institute (BRRI), proud champions of this innovation have finally produced results after a decade of research supported by HarvestPlus , a global bio-fortification mission now part of the Consultative Group for International Agricultural Research (CGIAR).

Why this development is even more important for the region is that typically the South Asia region surrounding Bangladesh has high incidences of micro-nutrient malnutrition. And whilst Bangladesh was reeling under annual disasters and combating acute developmental issues, it was still able to come out successful in what is being dubbed as a path-breaking research outcome that could work wonders for the region.

Another aspect is that development means cooperation. The research is expected to be shared with Cambodia, Indonesia, Philippines and Vietnam which are all countries that also depend highly on rice as a staple food, and have high exposure to similar issues – poverty, malnutrition, disasters and salinity. This could mean that in the coming years, research and innovation could transform the otherwise worrying future of human development in the region into a golden opportunity and a success story of adaptation and evolution.

For a country that is banking on its growing youth population to bring about economic growth and development, this is a crucial find. A US-funded study estimates the cost of malnutrition in Bangladesh to be as much as US$ 1 billion a year in lost economic productivity. For a nation that is struggling to combat poverty and has made significant progress in reducing the level of poverty by almost 26%, economic growth is vital. Malnutrition in Bangladesh is attributed to poverty, poor maternal health practices, healthcare facilities and inadequate infant feeding practices. Much focus has been laid upon maternal and child health projects by the Government and NGOs alike. The World Bank support for the National Nutrition Program in 2005 is one such example. Whilst it also included an awareness campaign, the program also emphasized provision of nutritional supplements.

So moving on from nutritional supplements to fortifying the actual food seems a simpler and smarter solution. And as rice is the affordable staple diet of most developing countries in the region, a fortified rice crop would be a most welcome stand-alone answer to malnutrition.