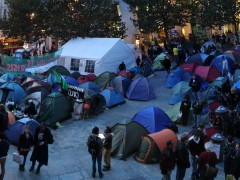 The Occupy movement, an ostensibly worthy crusade, knows its enemy very well, but does not know how to defeat it

Acclaimed historian Howard Zinn once boldly proclaimed that “democracy doesn’t come from the top, it comes from the bottom.” Indeed, every generation has struggled ceaselessly against the overwhelming tides of illegitimate authority. From the Hebrews fleeing slavery in Egypt, to women demanding suffrage in recent times, common goals of freedom and democracy have been hard won.

The torch of liberty has been passed to this generation, and the clash of the powerless with the powerful has manifested in the form of the Occupy movement. This strange phenomenon has been misunderstood and misanalysed by a hostile and condescending corporate media on the one hand, and overly optimistic leftist intellectuals on the other. The fact is that the Occupy protesters know what they are protesting against, but are nonetheless unable to articulate a cogent alternative.

Business of the State

Their fight is against an international menace that has permeated societies, breaking apart families, destroying the working class, and poisoning the environment: institutionalised economic injustice. Corrupt organisations, mostly corporations and governments, have tainted the democratic process with lobbying, profligate bailouts, and foreign wars that mainly benefit the wealthy.

The symptoms are evident. The richest 1% of Americans now controls 40% of the wealth. The United States’ income inequality now parallels that of totalitarian Iran and oligarchic Russia. Is it any wonder then that the rage simmering beneath the surface has now exploded into a cacophony of sound and fury?

This is perhaps why, to shallow observers, the Occupy movement appears inchoate in its aims. A walk through Occupy London, for instance, reveals a potpourri of causes: there appears no semblance of commonality. Regardless, a careful observer realises that economic injustice underlies many of these societal ills.

That, then, is the problem. The solution is much more difficult to articulate. Some occupiers endorse greater government largesse, others demand an end to bailouts, and still others seek to abolish the state altogether. Cries for “socialism” occasionally ring out among the troubled masses, but there is no agreement on how to break the cabal that bankers and politicians have established.

Is there any truth then to the media’s caricature of protesters as dim-witted ideologues keen on marijuana and two-cent philosophy? Perhaps, but at least occupiers have, finally, engaged the public in dialogue about the intrinsic links between state and corporate avarice. The first step towards recovery is identifying the problem.

But now protesters must focus on recovery itself. Some elements of the Occupy movement made reasonable demands; an end to corporate welfare programs and hazardous public sector cuts, for instance. They can also demand better financial regulation, tighter limits on corporate lobbying, and a return to the Bretton Woods international monetary system. In short, protesters should call on governments to restore the financial system to its original purpose of lubricating the economy, not destroying it.

Still, the light of liberty flickers on from Cairo to New York.

Cornelius Christian is a member of Global21, a student network of international affairs magazines and a partner of FutureChallenges.  A longer version of this article was first published in The Oxonian Globalist.