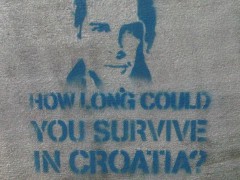 When I was in my third year of college, I started sending my CV and cover letters to potential employers in Croatia. If I had saved all the e-mails that I had sent, I might have set a new Guinness record in the category  – if one existed – of “ratio of emails sent without replies.”

Now, three years later, I am in France, finishing my second master’s degree. When people ask me “Where would you want to work after getting your degree in journalism?” I no longer answer “I will return to Croatia.” Actually, last week I said “I definitely don’t want to go back home… at least not straight away.”

Because now, the situation in Croatia is worse than four years ago:  according to the most recent survey, the unemployment rate has kept on rising, reaching the alarming figure of 19.6% in October.

Let’s be frank – a degree that I got in Croatia, in French and Italian language and literature, isn’t something that will get the Croatian economy back on its feet.

It is one of those degrees with low appeal in the job market, very often forcing new graduates to accept any kind of job. The problem is that these jobs, very often, aren’t enough to live in a decent manner, or worse, to even pay your rent. So it’s no surprise that I left the country after two years working in temporary part-time jobs (three or four at a time, with some extra translating on the side allowing me only to pay my rent, feed myself and save up for one trip abroad per year, my only luxury).

My friends who decided to move out of the country maybe aren’t representative of the broader population either, having finished their studies abroad or with degrees that aren’t attractive to the most sought economic sectors.

However, at the beginning of  September, I ran into a Facebook group called “Young people, let’s leave Croatia,”  created the very same month.  Three months later, the group has more than 47,000 likes and its administrators regularly publish content helping those willing to go abroad on how to get information about visas, job and scholarship opportunities, and more…

Screenshot of the Facebook page “Young people, let’s leave Croatia. The cover inscription says “We want to live, not only survive”. (Jelena Prtorić – CC BY)

There is a growing trend of young Croats wanting to leave their country in order to find a job, a trend facilitated by social networks through which the diaspora can share its experience. Among the most appealing countries there are Canada, high at first place, Australia, the U.S.A., Germany and Austria, but some decided to settle in Ireland, the Nordic countries, France or South America.

On the Facebook page of the group, people have been posting their success stories as well: “My family and I immigrated to Canada a month ago. My husband already has a job… We can live out of  his wage, while in Croatia we couldn’t make ends meet with three jobs.”

“I left two years ago and ever since I have been living in a South American country. […] Anywhere you decide to go, you will be better off than in Croatia.”

And young people, enraged by the job ads looking for “at least three year experience in a related field,” comment:  How do you get work experience when nobody hires in the first place?

Of course, there are also those for whom leaving Croatia is impossible:  not because of the sentimental attachment to the country, they claim, but out of the impossibility of saving up for a plane ticket.

If we all leave, who will be left?

It was a Spanish friend, during our recent discussion on the Spanish crisis, who asked this question. This question is also relevant for Croatia, where the demographic trends have been negative for decades: more people die than are born. A lack of policies to promote a higher birth rate – a difficult task indeed in an insecure climate of high unemployment, job insecurity and the impossibility owning your own home – and a high emigration rate contribute to the decline of a population of 4.3 million (according to the last census).

The brain drain is a serious problem that will impact – in fact is already impacting – the Croatian economy. The most skilled prefer to move abroad to study. In most of the cases, they don’t intend to come back, ever.

And though it is easier for the young and unmarried to move out of the country, there are thousands of cases where whole families said goodbye to Croatia.  This kind of emigration was, until now, characteristic of a war or postwar periods of Croatian history. Less qualified workers, less scientific researchers, less young entrepreneurs…but also less workers in general, make a country less competitive in the global market.