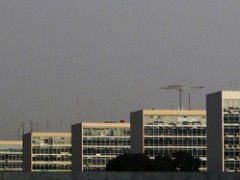 The current climate of upheaval and commotion took Brazilian decisionmakers by surprise. This is partly because the government so far has been a little too comfortable with the state of things as they are.

Up to present, all their press releases and interviews have revealed nothing but coolness and complacency on the part of Brazilian president and her ministries where everyone seemed to believe that a perfect equilibrium had been reached, with balanced market forces and an apparent absence of any external influence. Instead of following Europe and reducing public expenditure to keep the budget balanced, Brazil chose to do the very opposite – fostering social policies, creating jobs, and keeping the economy on an even keel ever since economic stabilization was achieved in the 1990s.

Traditionally, economic growth is something that touches entire populations, from top specialists to taxi-drivers. Still, if a country has very limited growth year after year, what does it mean? Well, it all depends. During the 2008 crisis, countries like Portugal, for example, had less of a tough time than their GDP might have indicated. This was because a considerable swathe of the population owns a “quinta“, a small estate where they plant and produce much of what they need. This simple example shows how growth has different effects on different economic structures as well as highlighting the limitations of measuring the economy by the GDP benchmark alone.

In Brazil, the fact that the country was seen as a safe haven for investors right after the 2008 crisis – when every developed country was struggling simply to get by – caused an investment rush that resulted in the 2010 growth rate, creating an illusion of grandeur that fueled the dream of non-stop development. Soon afterwards, however, the high growth rates turned out to be a blip, and the country plunged to a new low.

Even so, all the talk was still about healthy balance. Since public debt is relatively small in Brazil – especially when compared to other countries impacted by the economic crisis – the Brazil-risk has given the country enough credibility to use its resources to redistribute income through policies like the famous “Bolsa Família”, a welfare program that provides resources for families to send their kids to school and make sure they are vaccinated. In this way the country is slowly improving  on inequality and, because it escaped the worst impact of the crisis, is also managing to keep unemployment rates down low.

Yet under this façade of a perfect equilibrium, the government has until now been shielded from real politics. President Dilma has benefitted from this to keep her opponents at bay, leaving little space for compromise or negotiation, and avoiding serious real political issues.

The current situation, however, reveals how the perfect equilibrium decisionmakers tried so hard to sell simply cannot be true.

Improvements in welfare policies and social inclusion programs has made the people feel empowered and entitled to demand still more. Yet as much as it means jobs and stability in Brazil, “slow and steady” still does not equal real development. Education, health and public services in general are way below expectations, despite all the high taxes paid by citizens. Growth that is minimal or sluggish does not mean that Brazil will make it some day; what it means in fact is that growth and development are being held back by a series of poor decisions, weak institutions and failure of the rule of law.

Avoiding austerity is always a popular choice, because public expenditure usually means projects that create jobs which means more money circulating in the market. The problem is that this money will dry up eventually. With disappointing results from public policies and decreasing growth rates, Brazil might have another challenge to face in the long term.

Demonstrations are nothing new, of course. Neither is the state’s truculant stance in dealing with them. What is new is the timeframe; slow and steady is no longer enough. As luck would have it, the same government that now has to talk to civil society leaders and make important concessions is the same government that empowered people to move in the first place. Maybe, as president Dilma has pointed out, legitimate protests are what really makes a democracy, and, in this sense, they are a sure sign of positive change. Either way, this new accelerated pace is helping both citizens and government to understand what is the real meaning of growth and development for Brazil.