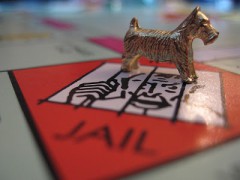 Non-communicable diseases is a puzzling term for many. Personally. I am bothered because it does not include a wide range of socially-relevant disorders. The pandemics of poverty as well as stigma and extra-legal investigation of people in a poor health condition are a chronic scourge along with obesity and cancer.

My country of birth is officially Bulgaria. The amazing amount of inanities spouted by its rulers are among the bunch of reasons that justifies its (thus far) officious name: Absurdistan. The recent outbreak of militia questionitis [*] in the country might change this.

Zealous policemen were reported [bg] to be sending out official requests for the personal data of patients treated in the capital city, Sofia. These demands were sent to a quite large number of doctors, all involved in the national Methadone Treatment Program. As you may know, methadone is widely used as a substitute during drug detoxification treatment. People in the Methadone Program are all former heroin addicts doing their best to gain a semblance of normal life. There are some 3,000 of them in the country, and more than 1,000 of them take part to the Program through one or other of the 15 dedicated centers in Sofia.

What caused this outbreak of militia questionitis? Well, there have been several (often armed) robberies of pharmacies in Sofia over the last 3 months, and important sums have been stolen along with medicines allegedly usable by drug addicts. So the Sofia police has decided to make a massive round-up of data from all the Methadone Program centers operating in the capital: these zealous policemen want the names and national ID numbers of all patients in the program in Sofia.

The police is the watchdog supposed to ensure respect – not violation! – of the law. Image by Klearchos (CC-By 2.0)

Such highly sensitive data collection is dangerous. Of course, the law does allow police to access this type of data — which is normally confidential and for doctors’ eyes only, — provided there is robust evidence against a particular person and an authorization has been granted by a judge. This has patently not happened here.

The police detained someone [bg] few weeks ago, but the robberies continue. As no other suspects are in sight, the police seems to have come up with the mind-blowing idea of taking the group of patients from the Methadone Program as a pool of potential suspects. On second thoughts, the … rationale – if I may use this word in the present context – is that either all drug addicts in the country target the Sofia pharmacies, which implies that the Methadone Program needs an overhaul, or that the unknown perpetrator stole drugs he cannot sell because he needs them himself.

In either case, the reasoning of the police is very weak. Apart from its ludicrousness, this request is downright discriminatory and violates three national laws [bg]: the one regulating the Ministry of Interior’s prerogatives; the law protecting personal data; and the law about health data confidentiality. And I’m not going to get in to what it might mean in terms of EU legislation or things such as the principles of the European Convention on Human Rights. Thus far, doctors have mainly refused to comply and release the sensitive data.

Looked at more closely, the picture it presents is pretty nauseating: the police is actually profiling a group of vulnerable people in frail health as potential suspects based solely on their participation in the Methadone Treatment Program. In other words, people with a serious addiction going through harsh detox times are collectively guilty-until-proven-otherwise of the armed robbery of pharmacies (and any other probable crime in the future). As if it were not enough to violate the laws they are supposed to protect, the police then forcibly engage another group of people — medical practitioners from the Methadone Program — as their accomplice. If the doctors comply, they will be automatically committing a crime.

The Republic’s watchdog has turned rabid. Beware the bite.

—
[*] Questionitis: an acute syndrome consisting of asking all kinds of intrusive questions that violate privacy. When coming from a policeman, especially one from a former ‘communist’ country in Central and Eastern Europe, the condition is defined as militia questionitis and is particularly grave.