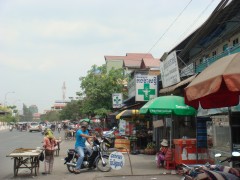 I can hardly find a hospital or clinic to go to if I fall sick, especially in the late hours of the night. I don’t have a family doctor, nor do I have a trusted hospital or a clinic, not to even mention the financial side. My parents often advise me to be very careful when choosing a doctor and even not  go see a local doctor immediately if I’m unwell, as they think that the unprofessional  medical practitioners in Cambodia and their blatant commercial motivation may actually worsen  my condition.

Recently I spent  US $20 for only a couples of minutes “consultation” at a hospital where the doctor failed to give me a proper diagnosis and hardly listened to the questions I tried to ask him as he was in a great rush to get to the next patient. I left in pain and after taking the medicines he prescribed, my condition actually did get worse. I was told by another doctor at a private clinic that the medicines I was taking  had several side effects and were reacting with each other and could prove fatal if I continued taking them.

As a stop-gap solution, I had to resort to some traditional treatment methods such as coining,  and taking traditional medicines which are cheap if not laboratory tested. Traditionally in Cambodian society our elders advise us to pray to our ancestors, and even to angels or devils. And I am not alone in hearing this – many Cambodians  from the lower and middle classes also share similar experiences. Access to good healthcare services is impossible without a healthy bank account. And even if you can access them,  you have to be careful about which medicines you buy and which medical service you seek out.

Most medical practitioners in the present Cambodian healthcare system are reported to have  poor credibility while being highly commercially minded.

In early 2013 alone,  two  cases were reported of  hospitals denying treatment to women in labor: the first case reportedly involved a 27-year-old woman who was turned away by staff at a referral hospital in Phnom Penh under the pretext that hospital staff were not working. She give birth to a baby girl on a small patch of dirt next to the city’s railroad when riding home pillion on a motor taxi. The second case was when a Phnom Penh maternity ward refused admittance to a pregnant woman and her husband as they couldn’t afford to pay for the care.

While there is no news related to the action taken against the hospital staff’s malpractice in the second case, the midwife who turned away the woman in the first case was transferred to the administrative department inside the hospital as the case came under wide public scrutiny. This culture of impunity for malpractice  in the health sector surprises no one.

The situation in Cambodia  is even worse when it comes to accessing medicines. Incredibly, any type of  medicine can be purchased in Cambodia without a medical prescription. Yet you have to be very careful purchasing  medicines even in drug stores as they might turn out to be fake or past their expiry date. Although there is a law to control this, people still go ahead and cheat just to make a quick buck.

Pharmacy stores along the mainstreet in front of the Cambodia-Russia Friendship Hospital, photo by the author (CC BY-ND 2.0).

A limited national budget for the healthcare sector together with weak law enforcement are the main reasons behind this. In 2013, roughly seven percent of the Cambodian national budget has been allocated to the Ministry of Health. Opposition lawmakers did suggest a larger percentage for this sector to ensure that the  citizens live a healthier life, however the move was never made.

Such shortcomings in the healthcare system are a huge liability for the economy. At the personal level, they trigger a double loss of individual income: expenses for poor quality or fake healthcare services; and loss of productivity caused by ineffective treatment of disease. From the national point of view,  these drawbacks mean that the economy is less competitive than the economy of other countries whose healthcare system is good.

Two main solutions should be considered. First, an adequate national budget should be allocated for healthcare. Second, strong law enforcement mechanisms should be put in place to ensure that we have more truly professional medical practitioners -from medical students to  practicing doctors and pharmacists.