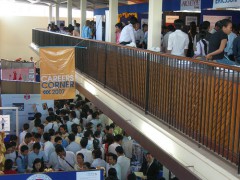 The baby boom during the 1980s and 1990s in Cambodia (after the nation successfully put a decade long civil war behind it and regained peace) has now resulted in the creation of a large labor pool for the Cambodian economy. Such a large stock of potentially dynamic workers could be an invaluable asset — especially while other developed countries are carrying the burden of increasing numbers of elderly people — but Cambodia needs to manage this opportunity carefully otherwise it might turn into a serious liability. To see how well the country has managed this opportunity so far, we have to look at both sides of the Cambodian labor market – demand and supply – and assess the current situation and its prospects.

From a demand side perspective, the Cambodian employment market is highly concentrated in two main economic sections: 1) wholesale and retail trade and repair of motor vehicles and motorcycles (trading activities and vehicle repairing services), and 2) manufacturing (mainly light manufacturing including manufacture of grain-milled products and clothing).

The preliminary result of the nationwide 2011 Cambodian economic census conducted by the National Institute of Statistics (NIS) shows that there were roughly 534,000 economic establishments in Cambodia — basically comprising of an enterprise and its fixed or movable branches and including street businesses. Trading activities and vehicle repair services have the highest prevalence of 56 percent (almost 300,000 establishments), followed by manufacturing with 18.7 percent (around 100, 000 establishments). These two economic sections each roughly account for 33 percent of the total number of persons engaged in economic activity in Cambodia.

High concentration on these two main economic sections suggests that current demand on the Cambodian labor market is for low-skilled rather than high-skilled workers. Most of the businesses in these two main economic sections are in the informal economy. In other words, they are operated without proper registration with the relevant authorities or without any proper records of financial transactions in line with the national standard. So work – both in trading, vehicle repair and light manufacturing – may not require quite such high skills as those provided by universities.

The 3rd Cambodian Career Forum in 2007 involving leading companies and NGOs targeted fresh graduates. It was a platform where candidates could meet with their potential employers and vice versa. (Photo with permission from a Cambodian blogger at http://www.vuthasurf.com/2007/06/unemployment-and-labor-market/)

This situation poses a great challenge to fresh university graduates and somehow reflects a mismatch between what is supplied by universities and what is in demand on the labor market. Since the two main economic sections require a low-skilled labor force, any intake of higher skilled workers in these sectors would be limited, which to some extent sets barriers for the industrialization of the Cambodian economy.

From the supply side perspective, on the other hand, there is quite an abundance of dynamic young workers in Cambodia. As of 2012, the number of baby boomers—aged between 22 and 32 — topped the three million mark or around 20 percent of the Cambodian population.

However, the Global Competitiveness Report 2011-2012 highlighted a worrying trend: country-wide labor productivity is lower in Cambodia than in neighbouring countries and in terms of productivity Cambodia comes in at number 97 in a list of 142 countries. Productivity in Cambodia is far lower than in Thailand (ranked at 39), and while it was comparable to productivity in Vietnam back in 1993, the gap between the two countries has since widened and Vietnam is now ranked at number 65.

Cambodia has a particular need to catch up in the areas of education, financial market sophistication, technological readiness and infrastructure. A new push is required to make all these areas responsive to a changing economy. The education sector—one of the most challenging and cross-cutting issues — needs to be rationalized to eliminate the mismatch between demand and supply  on the labor market. In this sense, the bonds between the private sector and education providers need to be strengthened through information-sharing systems in the areas of business and research and development (R&D).